This girl is a source of joy for so many in her life. It is precious to me that my boys still fight to be the one to wake her up in the morning and still ask if her nap time is over so they can go in and get her.

Some of the bigs went skiing last week and just had to wake her up to say goodbye. They were to be gone only one night!

We turned left yesterday, twice in a row, while driving to a park. She said, “Mama, you did a double-left.”

Then today, and this is TMI, but you know how kids are… she walked in on one of her brothers going to the bathroom (FORTUNATELY his back was to her and so she didn’t get a view of anything) and she said, “What are you doing?” He said, “peeing.” Her response:
“Peeing sitting down and peeing standing up are opposites.”

“Happy birthday to my favorite sister. I love you Anna”

Birthday Celebrations:
We started asking her back in October what kind of birthday party she wanted. I expected her to name a cartoon character or something easy. “Brown.” That’s it. Brown.

Okay… I waited a while and asked again. Same answer. Time and again, that was her answer. I was sort of stumped and, seeing as how we were sailing through the holidays, I let it go for a while.  One day while Anna, Matt, and I were strolling through the woods, we asked again. Same answer, only this time with a bit more detail: “Brown, like the trees are brown.” Okay, little sister! Now we’re getting somewhere!

I got home and started googling and within 15 minutes knew what our theme was going to be: Brown Bear, Brown Bear, What Do You See? As we didn’t own the book, I ordered it from Amazon, along with a brown tutu, both of which got here in time. I also purchased the Audiobook from Audible (which reads the story four times, back-to-back… Once straight through, once with a ding (to turn the page), once in Spanish, and the fourth time, the author himself reads it). We have thoroughly loved that audiobook! And, when the book did come in, Anna was familiar with the story!

I ordered from Ashley on Etsy a toddler-tee with Brown Bear on the front. It arrived yesterday, just in time for Anna’s party on Saturday!

I’ve purchased and been given ‘tree’ themed decorations and Sunday some friends are coming over to help decorate while Anna’s napping. And the birthday cake? Well, it’s a tree, of course.

We are thrilled to be celebrating today.

And I can’t even think of my gorgeous daughter’s birthday and the celebrations we’re having in our lives without thinking of Mama Kim and the rest of Anna’s first family. This day passes like any other day for them, except for the piece of their family that isn’t in their day-to-day lives. There’s a great theory that the body doesn’t forget trauma and that sometimes it grieves even when the mind can’t explain it. I think of Mama Kim right now and pray that someone in her life is reaching out to her, extending the arms of Jesus, offering the peace that is beyond understanding. No mother places her child in the arms of another mother without grief and time doesn’t necessarily make that grief go away, nor does knowing that the child she gave birth to is happy, healthy, and loved. Before joining the world of adoption my focus was always on ‘me wanting another child’ and the thought just after that was on taking care of a child who needed a family. I am sad to say that the thought of the birth mother (family) wasn’t much on my mind. It is now. All the time. With every new tooth, with every new milestone, with every new “joke” or incredibly smart quip, I think of Anna’s first mommy and the rest of her first family.

With that said, we have had a fun day. I started this blog post before she woke up and now it’s mid-afternoon and she’s down for her nap. She had a good day at school: instead of having her go straight to the PreSchool room, they let her go to “her” class and then they transitioned her once she was ready. I love our little CDC here on Kelley. One of her teachers sang to her and another had a gift for her. Bless! Bailey and Parker went to pick her up and stopped by the commissary for a Hippo. The commissary workers love her and made a big fuss over Anna’s birthday. Then we had a mini-party for her when they got home. Her buddy from upstairs, Alyssa, made her some cards, Nana and Papa had sent one, and both Bailey and Parker had given her gifts (Elmo and a bear, respectively.) 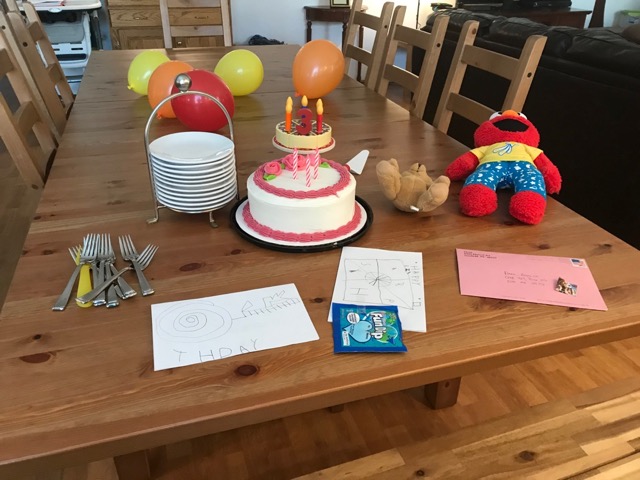 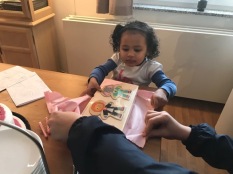 "Yes, they're all mine." The answer to the question I hear most often.
View all posts by Jennifer →
This entry was posted in adoption, family, friends, germany. Bookmark the permalink.