I’m sitting here writing this on a Sunday afternoon, and we have completed 10 days of school. This may have been my favorite start to a school year, ever. Things have gone smoothly and I’ve enjoyed my job so much! I do not take for granted that it is the last year I’ll have five students… at this time next year Hayden will be a college freshman.

Here we are on our first day of school this year. I am sorry to say I didn’t get individual shots of everyone. It’s a bit anticlimactic for homeschoolers since we don’t have to “get ready” for school. And, on this particular first day of school, Hayden had a killer 24-hour bug but he pressed on and got through a good deal of his work.

Hayden sleeping on the couch and Parker making himself breakfast: 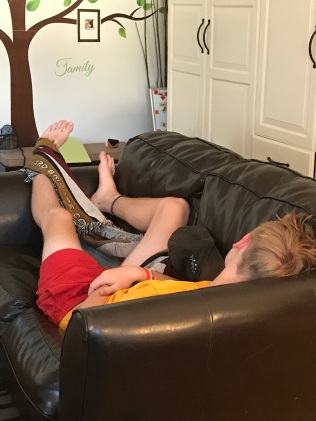 Anna has gone to her class from 8-12 every day so far, giving her a chance to play with other little kids and us a chance to power through some intense subjects. Our mornings have been sweet. I am reading aloud to the boys each morning because I truly believe it’s valuable educationally and relationally. After I read to them, I send Parker to the office to to do his independent work while I teach Film Analysis and Writing (The Elegant Essay). I’m having a blast with those two subjects! (If I were to go back to the classroom, I may consider high school!)

After we finish with those classes I move into the office with Parker. He’s doing AMAZING and actually surprising me with the fact that writing is his favorite subject (can you say teacher’s pet?). On the first day of school Parker had used pretty horrible handwriting during his writing lesson. As I was trying to correct him, he literally teared up: I had hurt his feelings. We pulled out our Handwriting Without Tears book and simply set it out, open to the page that has the alphabet written twice; once capitals, once lower case. His handwriting improved instantly and he was incredibly proud of himself. I bragged on him and had him show everyone just what an improvement he had made in an instant.

Something happened that made my eyes leak a little on Thursday. He had been using his amazing handwriting every day since and making the key word outlines with less and less assistance from me each day. On Thursday he did the entire assignment alone. Bailey came in toward the end of our lesson and so I suggested Parker read his “story” to Bailey. Parker did so, and then Bailey complimented his work and handwriting. Parker beamed. I sat there and watched the interaction and inside I was screaming, “This is why I do what I do!”

There are bound to be days that don’t go as smoothly as the first ten days have gone, but I want to savor both the good and bad days. I am amazed that I have been blessed to do this job for going-on 13 years. I didn’t intend to homeschool all the way through and I remember looking at women who had done so as if they were superheroes. I’m definitely not a superhero. I just love my job and every summer, when we’ve evaluated the previous year and looked toward the next, we’ve known without any doubt that homeschooling was right for us in that season. I expect it to continue to be right for us, but that is up to God and the plans He has for me and our kids in the next 16 years. (If I homeschool Anna, that will be a consecutive 28 years.)

Enough of the sentimental. Here are the facts about this school year:

Bailey –
Core 200: History of the Christian Church
Apologia Biology
Geometry Teaching Textbooks (Disks)
Film Analysis
The Elegant Essay
German Rosetta Stone
Soccer – CYS
Parker –
Continuing Core B/C: World History until he finishes it, probably by December, and then he’ll start Core D/E: American History, which we’ll spread out over the next year and a half. {B/C and D/E are two year cores they have combined into one year each. Had I purchased these Cores new, I would have bought them individually and spent two full years on each World and American histories. However, I bought these used from a friend so we’re making it work, supplementing to make each last a year and a half.

Anna –
Colors, letters, animal sounds, etc. (We don’t do school with our littles until they’re at least five.  We just PLAY! We read a lot of books and Anna does ‘ballet’ along with Felicie, the character from Leap. Today during our school day she and I went for a run and picked flowers from a self-pick field and and we each at an apple we picked from a tree. Science, people!)

"Yes, they're all mine." The answer to the question I hear most often.
View all posts by Jennifer →
This entry was posted in family, homeschooling. Bookmark the permalink.