We celebrate non-stop for five months, seven, really because mine is in November and Christmas is in December!

I generally like to highlight each of the kids on their birthday but with moving and getting settled in, I’m doing good to get this out there! While it’s mostly about the boys’ birthdays, there are a few other things I’m putting in because they’re just worthy of being mentioned.

Carson’s birthday was in February, the day after we received our HHGS. 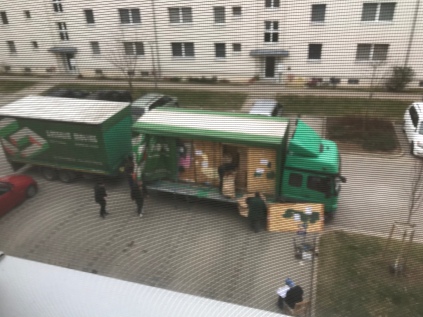 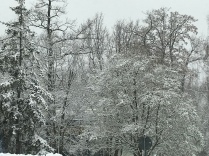 We celebrated by going to Ramstein to see a movie with our dear friends, the Wests. We received our HHGS Thursday and Friday and left an hour after our movers drove away. While the rest of the family was in the theater, Anna and I shopped at the Ramstein mall and then we walked over to the USO in the airport and played in the family room. Because it was Valentine’s weekend, Dunkin’ Donuts had heart shaped treats which I couldn’t resist!  Anna had to have one. 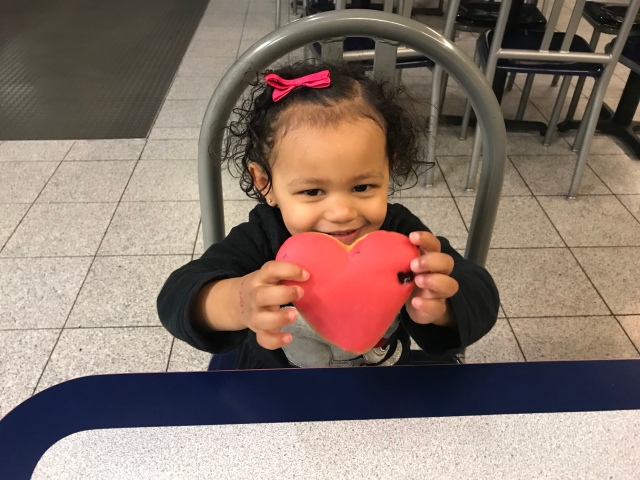 We stayed at the hotel on Baumholder so Parker could spend some time with his buddy. 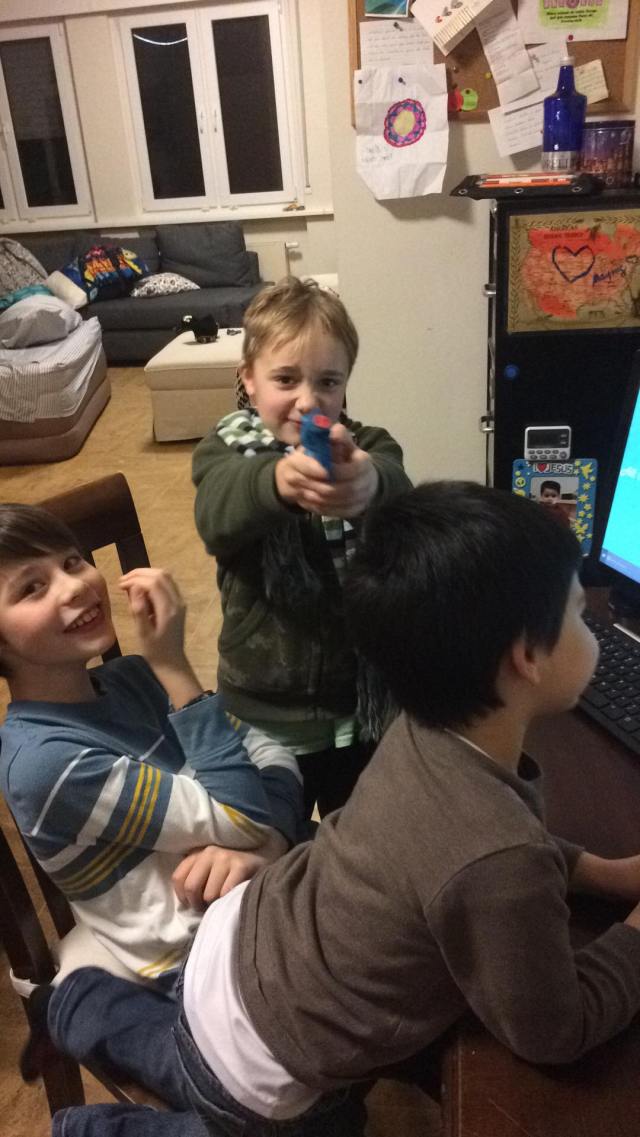 We forgot Anna’s pack-n-play so she slept with us. She literally covered her face with her blanket and went to sleep while we were getting ready for bed.

When we got home we Carson’s favorite meal, spaghetti, which I did take pictures of us enjoying but promised not to share… teens.

Our family loves a good meal of schnitzel and fries so to celebrate Parker’s and Bailey’s birthday we went on our first real meal out to a traditional German restaurant. I can’t say it was the most relaxing experience as there was no high chair for the toddler, and ordering wasn’t as easy as it could have been (confusing translation issues) but the food was delicious and the restaurant was adorable.

After dinner we came home and had cake and ice cream. Our commissary is tiny and the only cake they had was a plain white sheet cake. I let the boys decorate the cake and we enjoyed the sugar rush… Anna loved the chocolate ice cream! We didn’t have matches so they laughed when I made them pretend so I could take pictures. 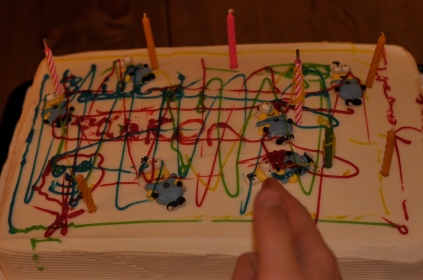 Because we haven’t been here long enough to do birthday parties the way we generally do, we took Parker’s new friend with us to Sensapolis. It was pretty cool! Parker was very disappointed that he was too short to ride the go-carts but other than that, it was a very good way to celebrate their birthdays.

Because we now have a princess, we got to enjoy watching her experience the massive castle. 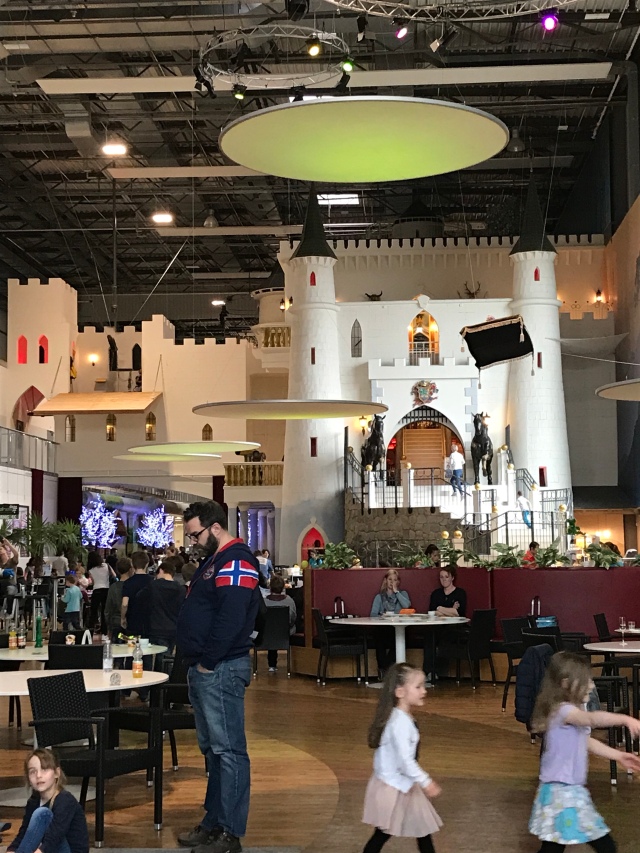 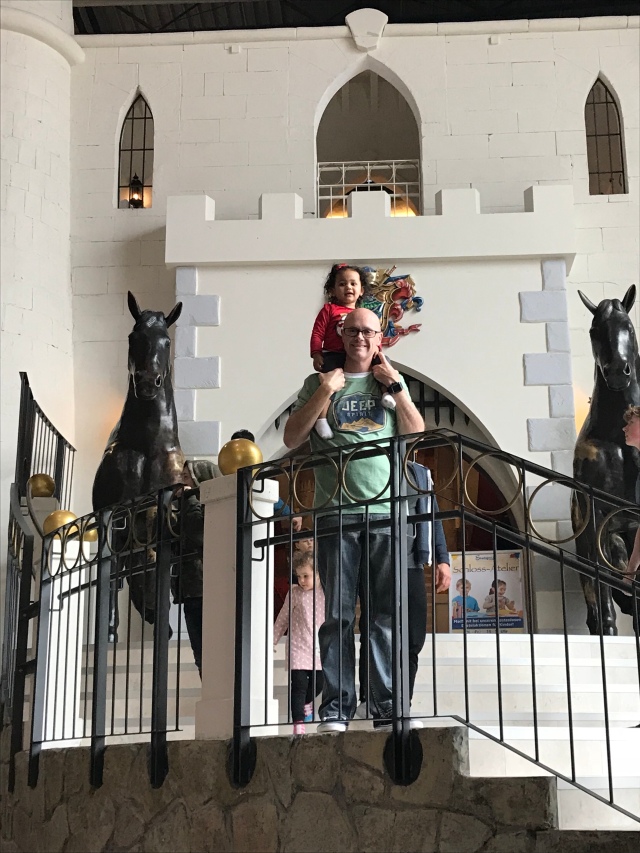 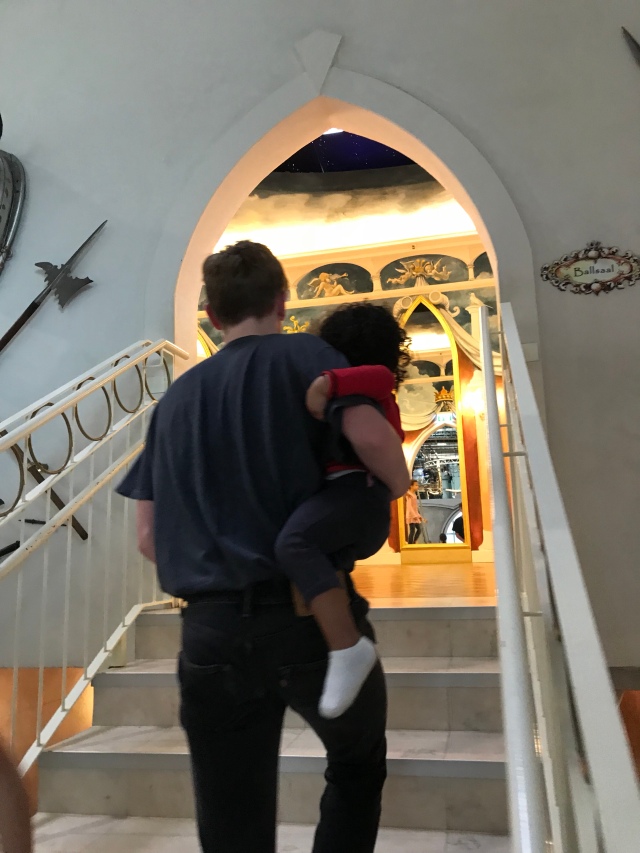 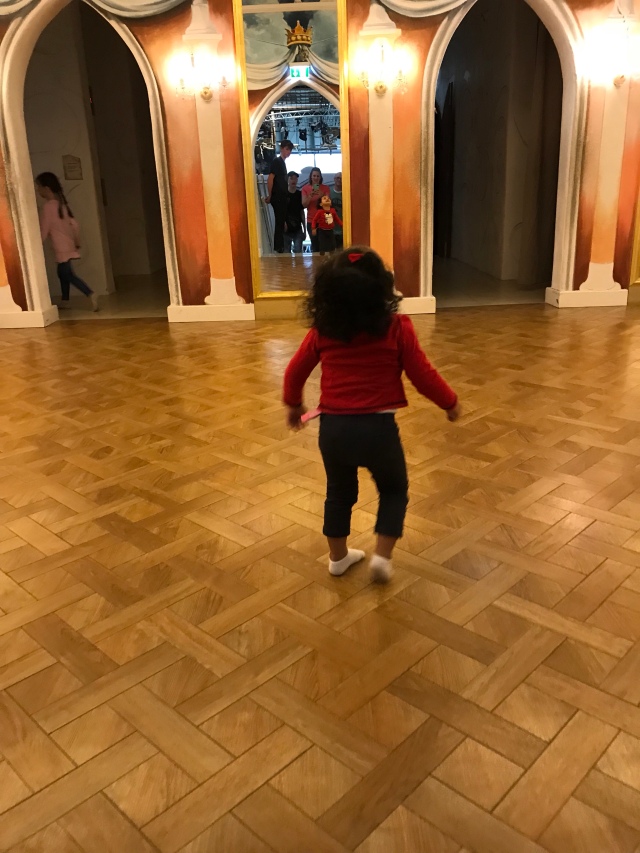 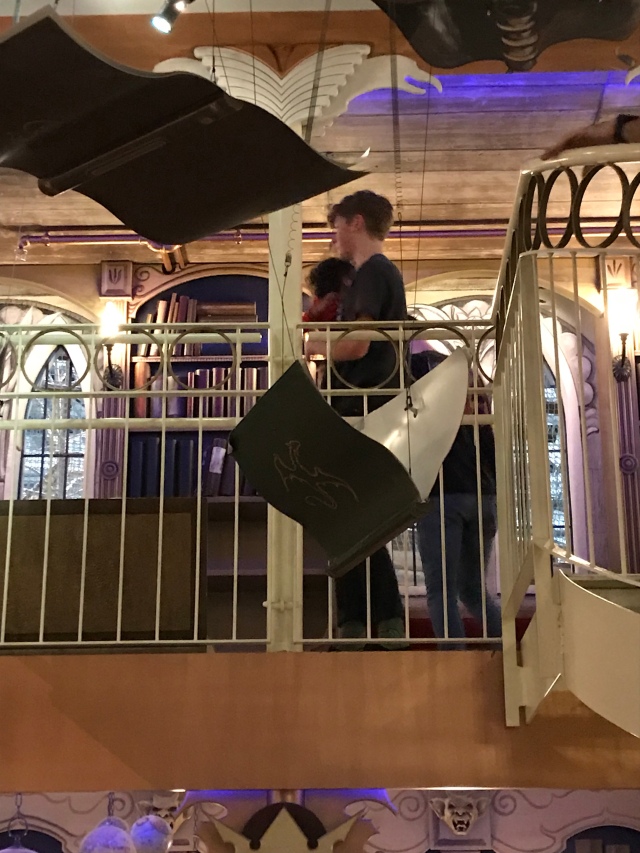 Hayden is a little sore from soccer tryouts/practices!

After the boys tired of the castle, the girls stayed behind and danced in the ballroom. Anna is a dream come true for our family.

Anna saw the “deer” and wanted a picture with it. 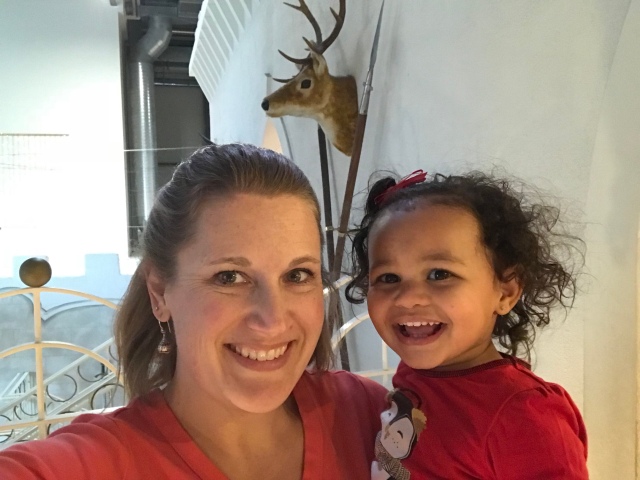 Before we toured the rest of the park Anna and I spent an hour in the toddler area exploring. I rarely get to do these things with her so I savored every expression… 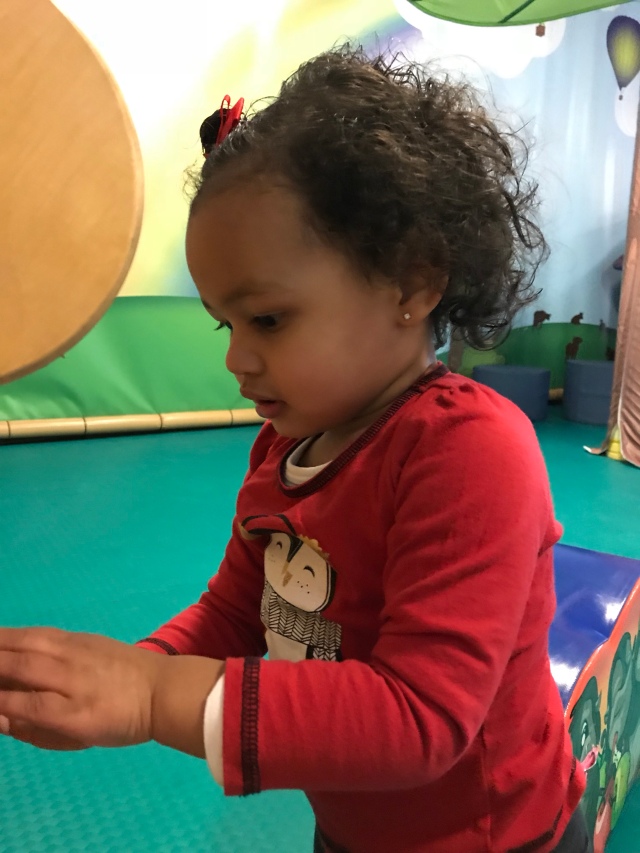 Parker’s actual birthday was yesterday. The night before, he came out of his room for a second hug and said, “Tomorrow after school do you wanna go see my fort in the forest?” The first thing that ran through my mind was, “He’s forgotten that tomorrow is Tuesday and I have PWOC.” The first thing I said was, “YES!” I then messaged my PWOC facilitator and told her that I had a date in the forest and wouldn’t be at PWOC.

Parker and I did minimal school yesterday and we loaded up Anna (in the Ergo), water bottles in his backpack, and off we went. I have to say, I was shocked at just how cool the fort is. He “inherited” it from other kids who built it. 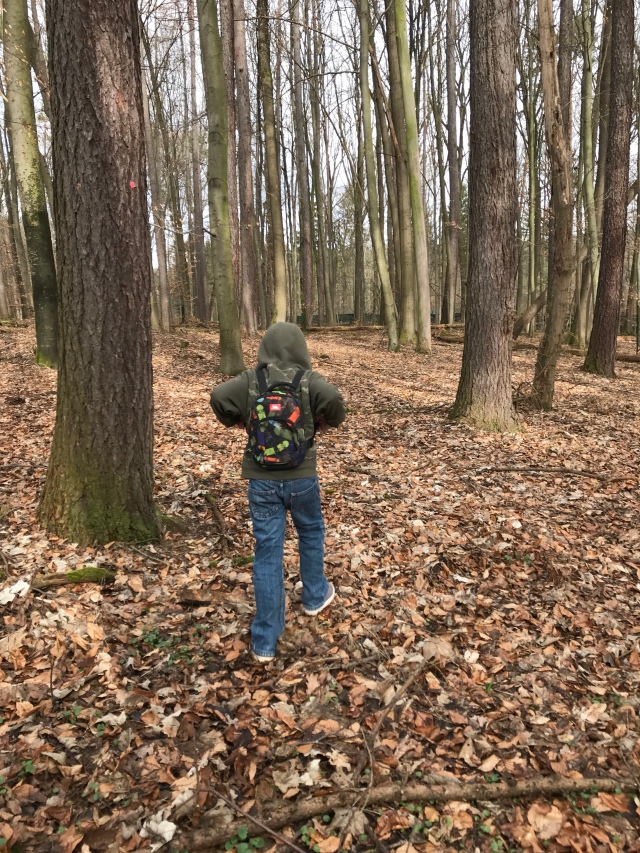 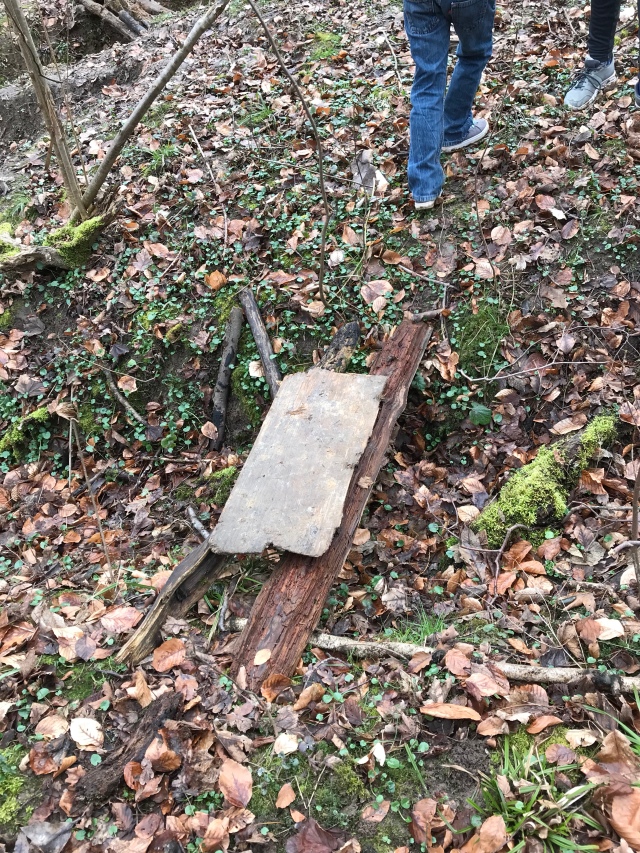 The Fort.  Scale is hard to see but that’s a hole where a tree root system used to be. Those branches are taller than I am.

After we got Anna down for a nap, I took the birthday boys to the PX where I let them get their traditional Starbucks coffee. They received money from Nana and Papa and from the Eastes Family. Here they are opening their gift cards from the Easteses… I think it’s funny that Matt snuck up on Parker! 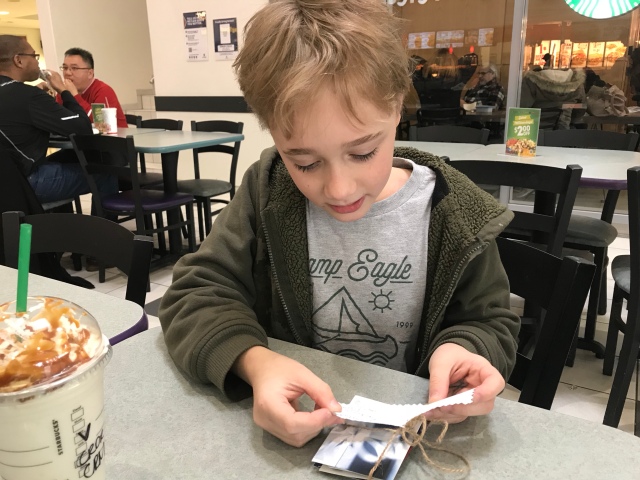 While the boys were off shopping I took what was supposed to be a quick stop in the bathroom. When I finished my business and tried to leave, I found I was stuck. At first I was sure that I was doing something wrong. I tried to text Matt but there is NO service in the PX… at least there wasn’t in the bathroom! I waited until a lady came in who could try the door from the outside. She couldn’t get it either so she went for help.
The Food Court maintenance guy came and he couldn’t rescue me. He climbed up into the stall next to me and had me try the door while he watched.  He agreed that I was trying to open the door the right way and said he couldn’t fix it.
They called in reinforcements who disassembled the door and freed me. Apparently this happened to a woman on Saturday and she ended up having to climb over in order to get out. I could have done that but I was willing to give the staff the chance to rescue me, which they did. I was awarded no prize for getting stuck in the bathroom. 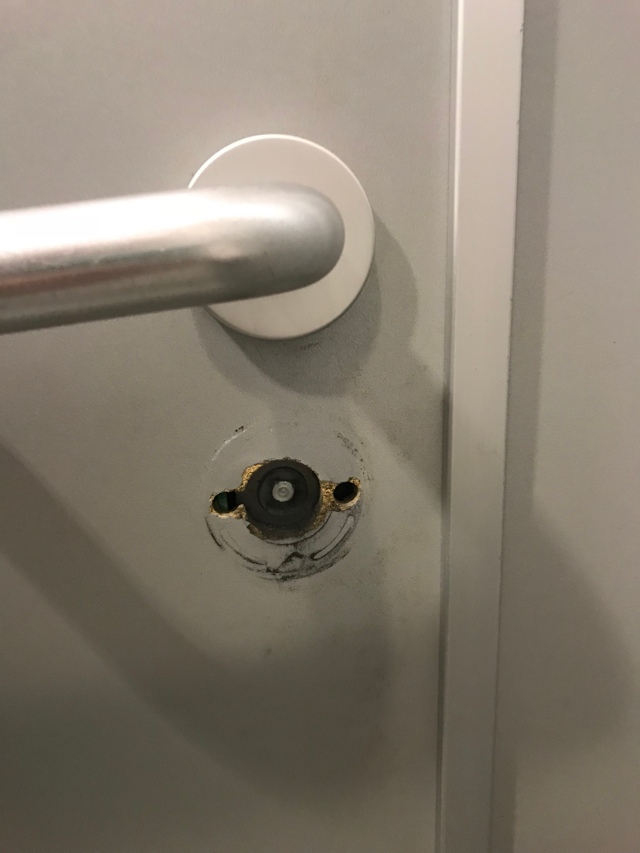 The boys didn’t find what they wanted to buy for their birthdays so we went to a nearby mall. At Game Stop they hit the jackpot! They found Pop Bobbleheads and all Marvel was on sale 20% off.  Instead of being able to get two, they were each able to get three! On the way home Bailey said that if the package he ordered was at the post office, it’d be the perfect day. (It had a gift for Parker in it as well as something for himself.)

I went to the Post Office at 5:50 and sure enough, the package had arrived. Just this morning Bailey said, “Yesterday was the best day I’ve had since we got here. It was perfect.”

Parker had requested Shrek Noodles for dinner which I prepared from scratch… pesto and all.

Good times. I’m in heaven over here with the easy pace of life and the cool temperatures. I miss my friends and have found myself dreaming that we are hanging out.  Good dreams, but I’m a little sad when I wake up. Parker and Anna are settled in and good to go. Hayden, OH! I forgot to mention this! He tried out for the high school soccer team and made it, so he’s getting connected and practices five to six days a week. The people on the team are high quality individuals and I love that he’s playing soccer again. The rest of the boys start CYS soccer very soon. Bailey goes on a retreat this weekend with Club Beyond and will return on his actual birthday.  Matt is now the senior chaplain at the contemporary service and we really love the people there. School is going well, though we will be working past May. We usually like to be done by early May… we’re looking at the end of June at this point! Some of the teens feel more settled and content than others, but I know that is to be expected.
Friends will be made in time, not overnight.
Friends left behind will be missed forever… that won’t go away.

"Yes, they're all mine." The answer to the question I hear most often.
View all posts by Jennifer →
This entry was posted in brothers/boys, family, friends, germany, homeschooling, moving, parker. Bookmark the permalink.