Biology – Carson is doing much better at learning Biology than I am at teaching it.  He’s understanding the material much better than I am and for that, I’m thankful.  We did have a fun few weeks watching home-made cultures grow under the microscope… until we had to dump them out and the entire house smelled like something I can’t describe.  Who knew rotting rice could out-smell rotting egg yolk?!?  Neither of us are loving biology but we’re managing. 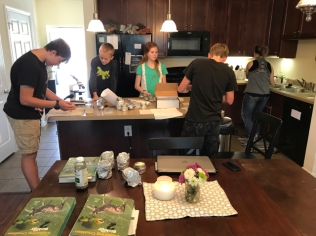 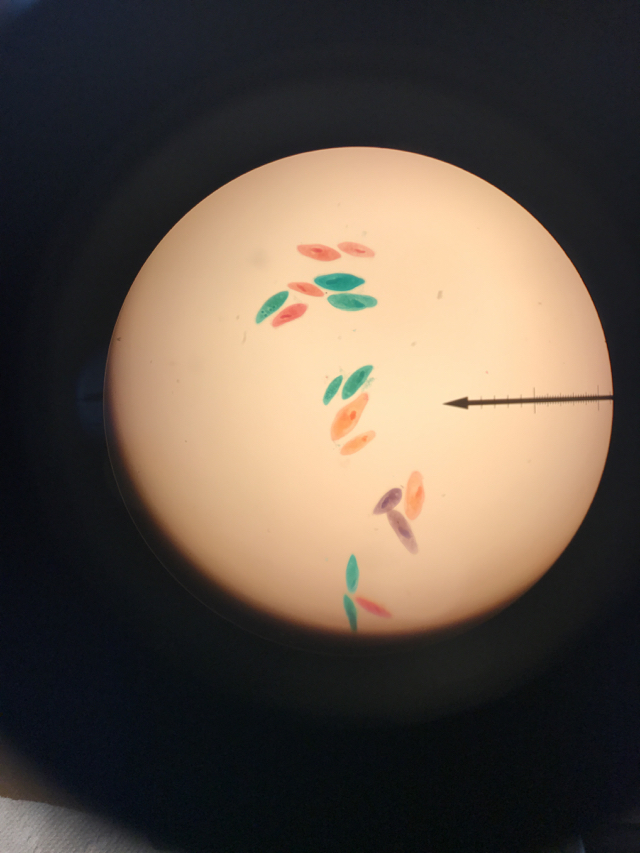 Geometry – Nothing to speak of here except a steady plodding along with Math.  I did have all three bigs take a week off of TeachingTextbooks math a couple of weeks ago to strengthen their foundations in their respective math subjects.  Khan Academy has been an invaluable tool for me.  I found a few weak spots in each of the boys’ understanding of their respective math levels and assigned videos and practices related directly to those weak areas.  Having a different teacher explain the problems from a different perspective helped and I do intend to utilize that throughout the year.  I think Carson is doing very well in Geometry and is fairly independent in the subject.
Writing – Carson and Bailey are doing the same writing program:  SICC-B from IEW.  If you aren’t familiar with The Institute of Excellence in Writing and you are in the market for a good writing program, I HIGHLY encourage you to check this one out.  As someone who finds writing an easy task and does so naturally, IEW can feel mechanical.  At first I didn’t love the program because I felt it was a bit formulaic  (In fact, it is completely formulaic.)  But what I have discovered is that the students learn the formula and then, with time, their writing becomes more fluid, more natural, and they begin to write with more variety in their sentence structure.  Now that we’ve been using the program for a few years, Carson and Bailey both surprise me with their writing examples.  This “formulaic” approach is helping my students write more naturally!  It sounds very counterintuitive but it is working.
Current Events – Carson is required to turn in two current event reports a week.  I want him to know how to dig into the current goings-on in our world and I want him to be able to pump out one-page reports on topics he selects.  He loves World News Group Magazine and our friends, The Hales, have a subscription.  Carson brought one home that they were finished with and read it through several times.  They have offered him all of their old copies and now he’s loaded with content to write about.  I love to see my history-buff read these as they are articles of history in the making.
History – This year Carson is doing Core 200, History of the Christian Church.  The beautiful part of this core is that it gives the back story to why our world is at war today.  The war we are fighting today stems from events that occurred centuries ago and I believe the current events that Carson is writing about can be traced back to many of those events.  If his brain doesn’t connect the dots now, it will as he goes through this course.
Literature – Core 200 also includes Classical Literature.  He’s currently reading Jane Eyre and I finished it just last night. I had never read it! Other titles he’ll read this year include, A Christmas Carol, The Strange Case of Dr. Jekyll and Mr. Hyde, Oliver Twist, Pride and Prejudice, Robinson Crusoe, and Romeo and Juliet. I am very excited to ear-read some of these along with him!  I am quite disappointed that I didn’t start Sonlight early enough with Hayden for him to get through this Core.
P.E. – Carson is in the habit of going for a bike ride very early in the morning.  He’s home by 7:15 or so, ready to get started on his school work.
German –  Rosetta Stone
Speech – At Co-op
Foundations in Personal Finance – Dave Ramsey’s high school version of Financial Peace University

With Carson in the 9th grade, I officially have two high schoolers.  Next year, I’ll have three!  The core he’s doing is fantastic and one of my favorites so far.  Paper management is one of Carson’s least favorite aspects of school and I find his papers everywhere… a serious downfall of homechooling is that students aren’t forced to do a good job at this.  If they get to “class” and don’t have all their work, they simply need to go to the other room to find it.  Had they gone to school without it, they would have been out of luck. As a homeschooling mom I struggle with just how to emphasize the importance of this skill to my kids.  Any suggestions?