If it sounds too good to be true, it might just be true!

The first time I got an email from Amanda I overlooked it.  I honestly thought that there was no way anyone gets a free, all-inclusive trip with no strings attached.  I’m skeptical because I know plenty who have been burned by believing emails that promised something amazing.

Then I got a second email about this offer that said, “I know this sounds like a scam but I assure you… you and your husband really have been nominated to receive a Revitalization Retreat offered by the Chris Kyle Frog Foundation. ”  She told me to check them out and when I did I realized that this really was a thing!

Matt and I had a phone interview with three of the CKFF team members during which they told us that we were not only nominated but that we had been selected!  We were given VIP tickets to the Chris Kyle Birthday Bash, the annual fundraiser in Fort Worth during which Easton Corbin would be performing and Jay Novecek would be MCing.  Our retreat would be tailored to us and they asked us to give them some activities we’d be interested in doing.  We told our sweet “retreat concierge” that we would love a couples massage, a movie (that didn’t include cartoons), and something I have been eyeing since we got to Texas: Urban Adventure Quest.

The foundation wanted to make sure we were able to attend this retreat at absolutely no cost to us.  They covered the following costs:

This retreat has been invaluable.  I know there is a dollar figure that will be attached to this retreat on the Foundation’s end, but on our end, it’s priceless.  Taya Kyle’s vision for these retreats is to send military and first-responder couples away from their every-day-lives to focus on each other.  Matt and I have gone to plenty of marriage retreats but usually Matt’s working and our marriage isn’t the focus.  This has been amazing.

If you are looking for an organization to donate to, I can assure you that recipients of this gift are grateful for all who have donated to make the retreats available.  Listening to Taya’s passion for marriage Saturday night left me feeling like I had been to church:  God at the head of the marriage, THEN the husband and wife relationship; THEN the kids.  Just that morning I had written a reference letter for a couple I know who is starting the adoption process.  I wrote to the agency that I fully support this family adopting a child because they put God first, and just after God, they put each other.  Their other kids are thriving, confident, and well-adjusted even in spite of the difficulties that life sends their way and I believe the kids are doing so well because they are confident that their parents love each other and their marriage is stable.  I smiled as Taya spoke the very words I had written and sent to the adoption agency just hours before her speech.

Matt and I will celebrate our 18th Anniversary 29 May and we had hoped to go away for a few nights in celebration.  This weekend is the perfect opportunity!  Having Nana watch the kids gives us such peace and that was the first gift the CKFF gave us. 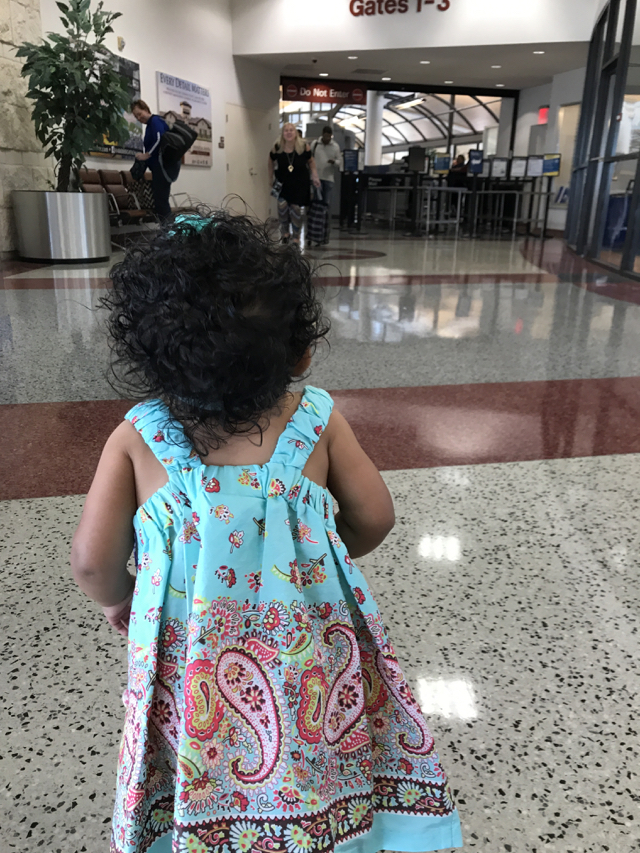 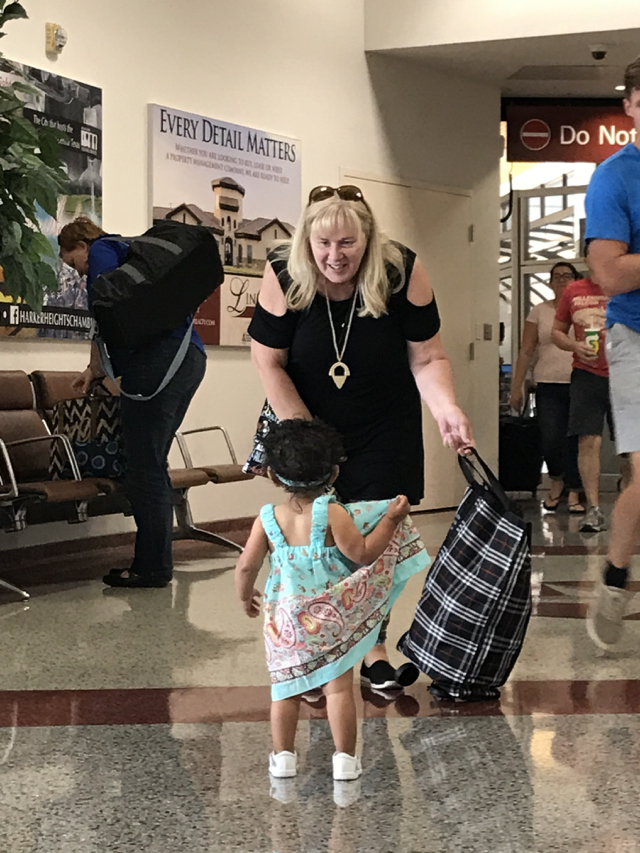 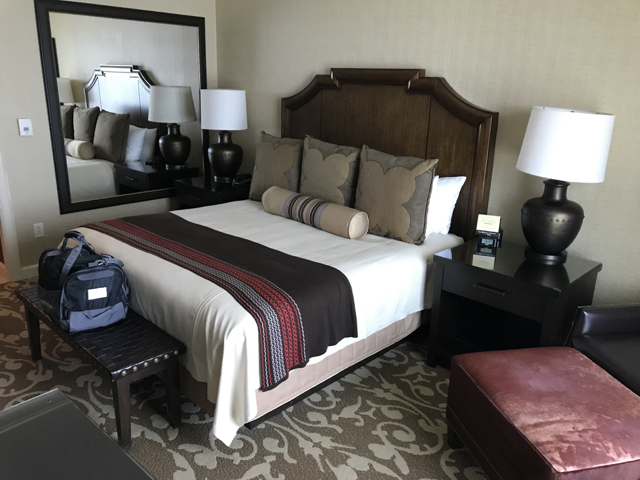 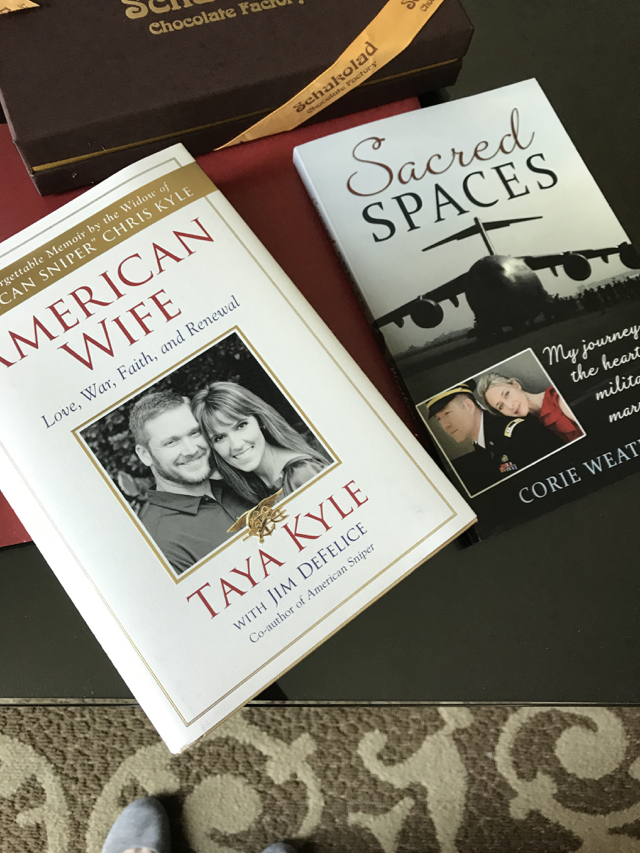 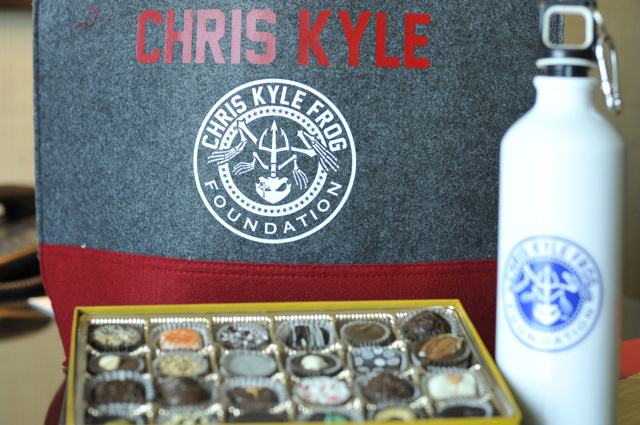 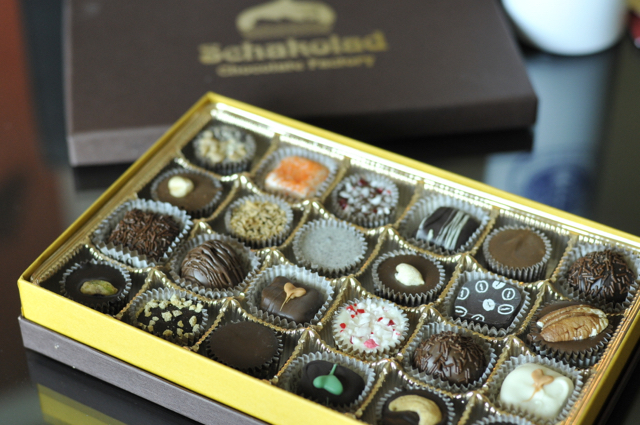 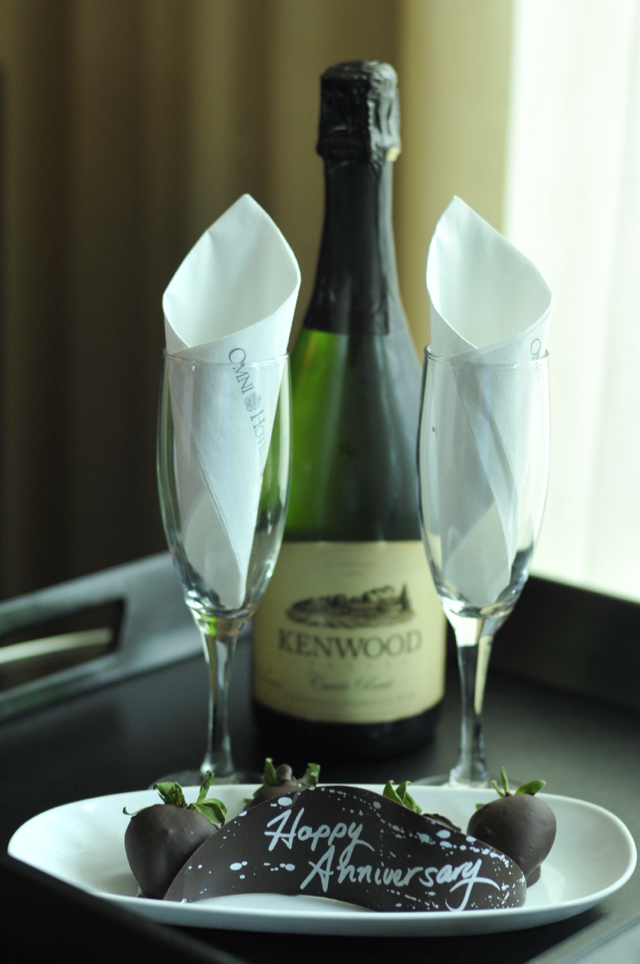 To get our steps in Matt and I walked four miles on Saturday after our couples massage.  (I know – most people exercise and then go for a massage, but our massage was scheduled for 0900 and we didn’t want to get up early.) 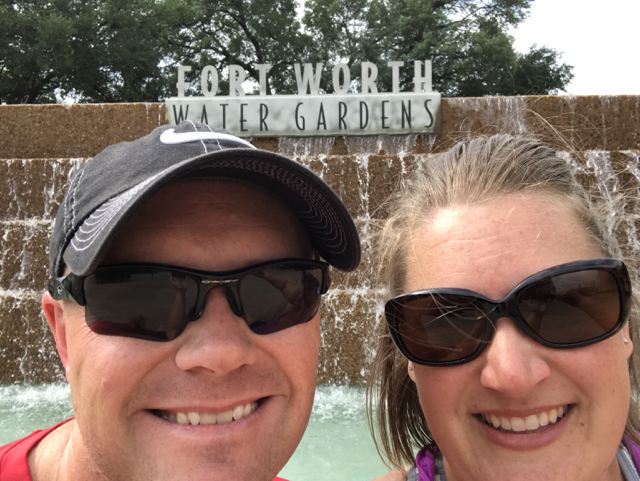 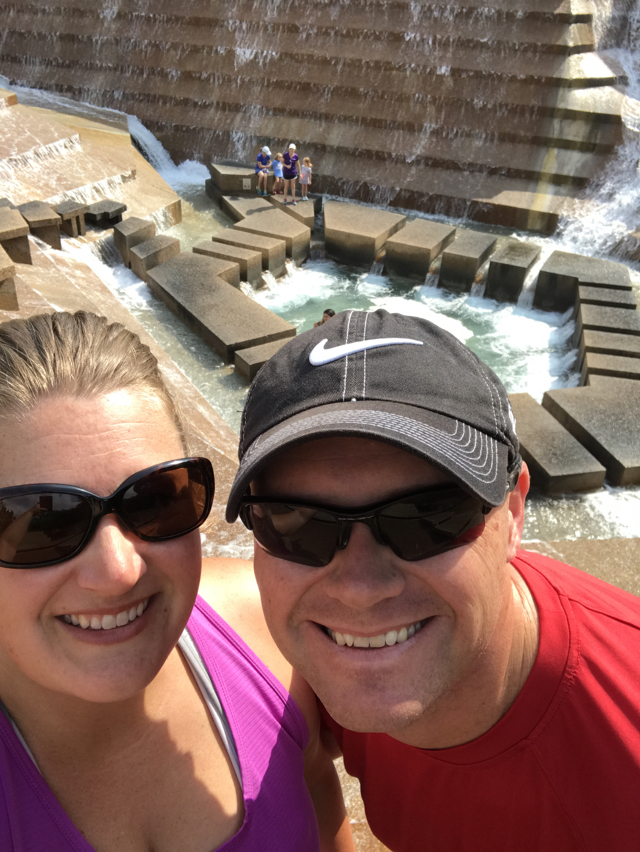 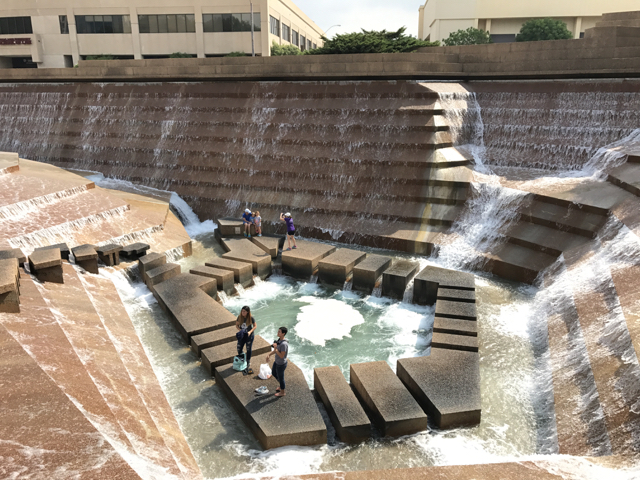 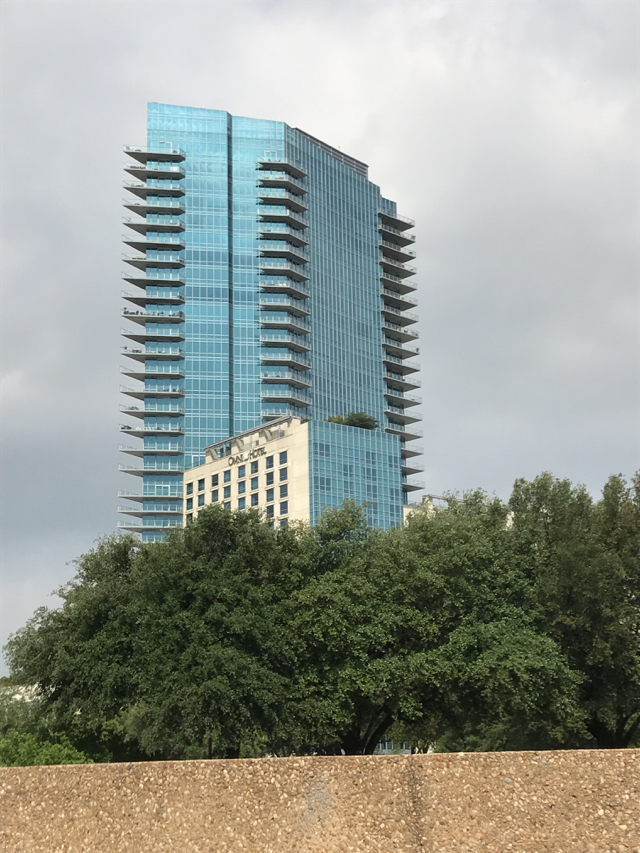 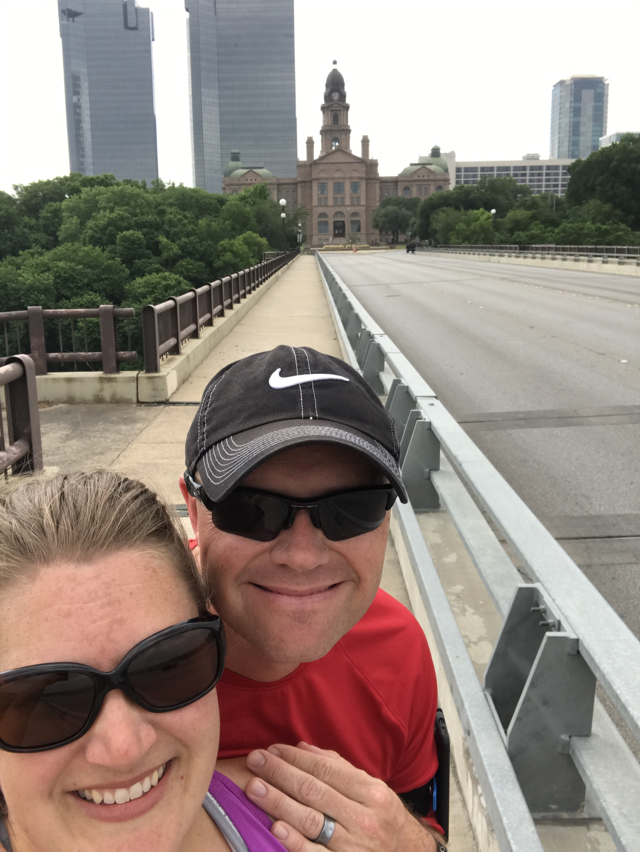 Corie and Matt recommended The Meddlesome Moth and we thoroughly enjoyed our dinner.  To get the best meal, order the Steak on a Stick with the sides that come with the ribeye.  The ribeye was good, but the steak on a stick was out of this world.  The fries and salad that came with the ribeye were fantastic… put those two together and you won’t regret it! 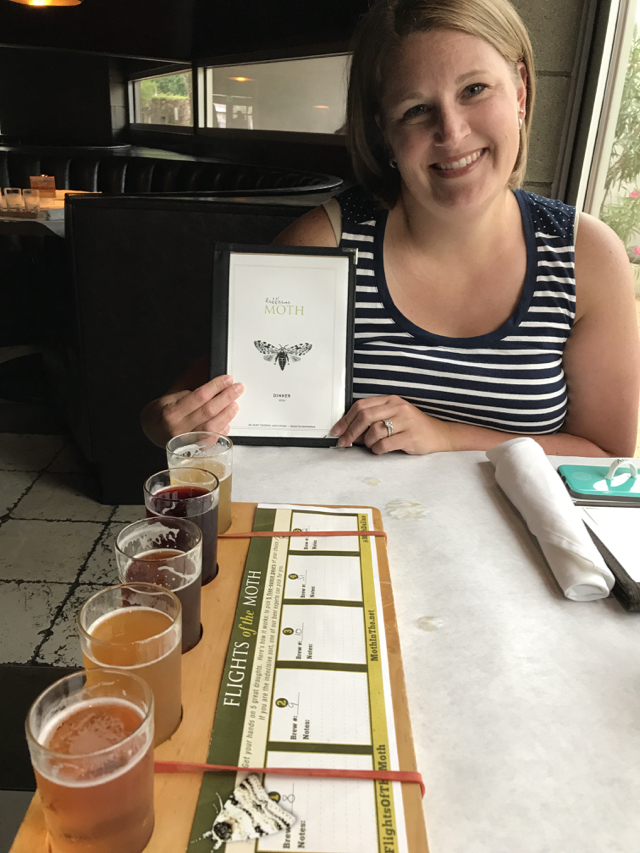 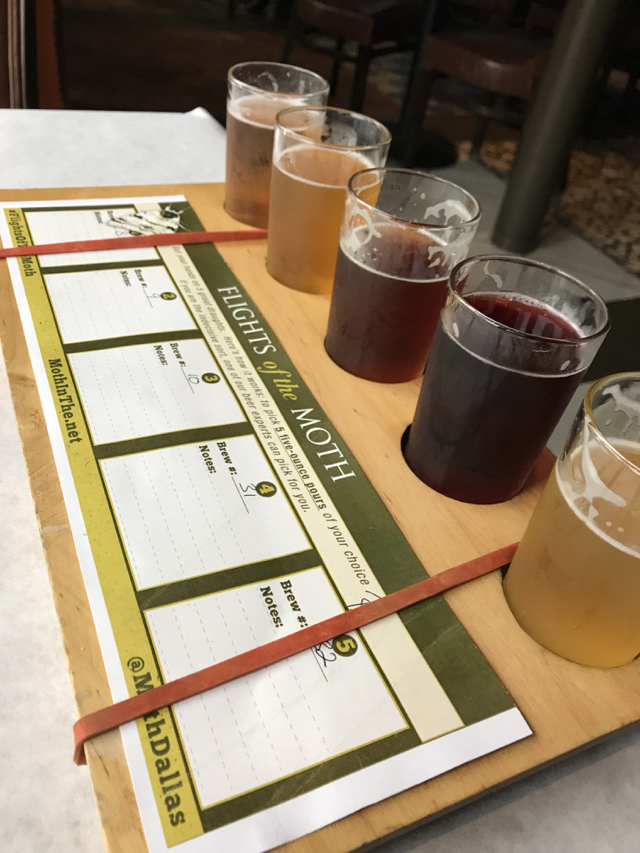 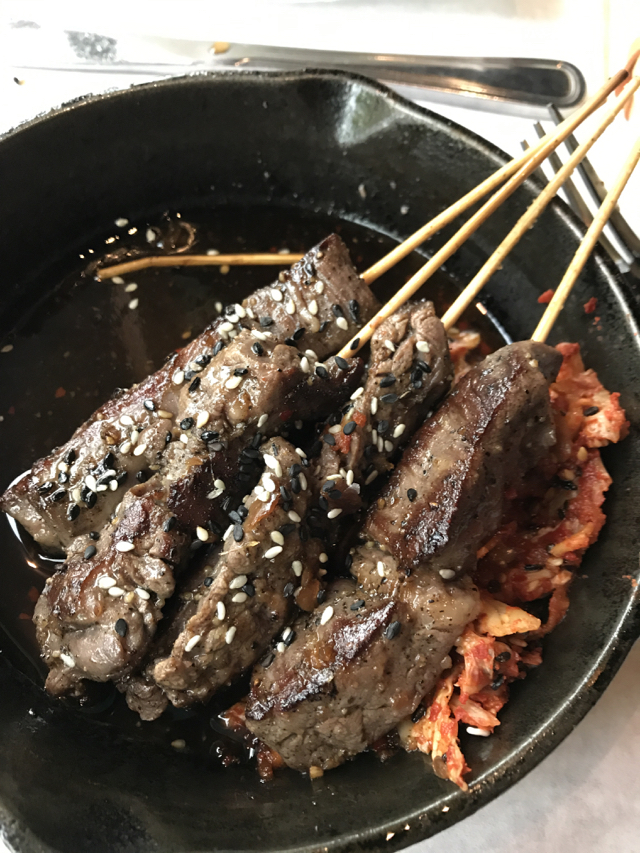 I attended the Great Homeschool Convention several weeks ago with my friend, Stephanie.  We found The Velvet Taco and I couldn’t wait to bring Matt.  Fish ‘n Chips taco with a side of pork nachos. 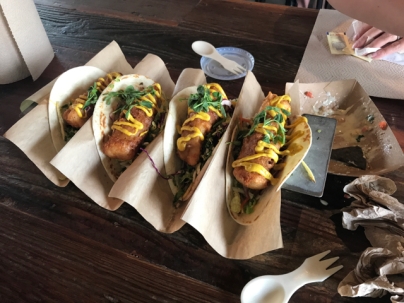 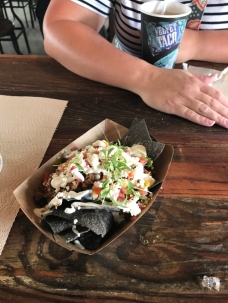 The focal point of our trip to Fort Worth was the Chris Kyle Birthday Bash.  Matt and I drove up to Billy Bob’s and let the Valet take care of our car – our name was on the list for free valet.  We entered the doors and were taken straight to the sign-in table.  We were given bags of goodies and then our VIP passes.  Amanda took us to the VIP reception room and just in front of the entrance was a photo-op spot.  I initially thought the picture would be just Matt and me, and just as I stepped up to the backdrop, Easton Corbin walked up.  I look forward to seeing the professional pictures that were taken but below are some they took with Matt’s phone. 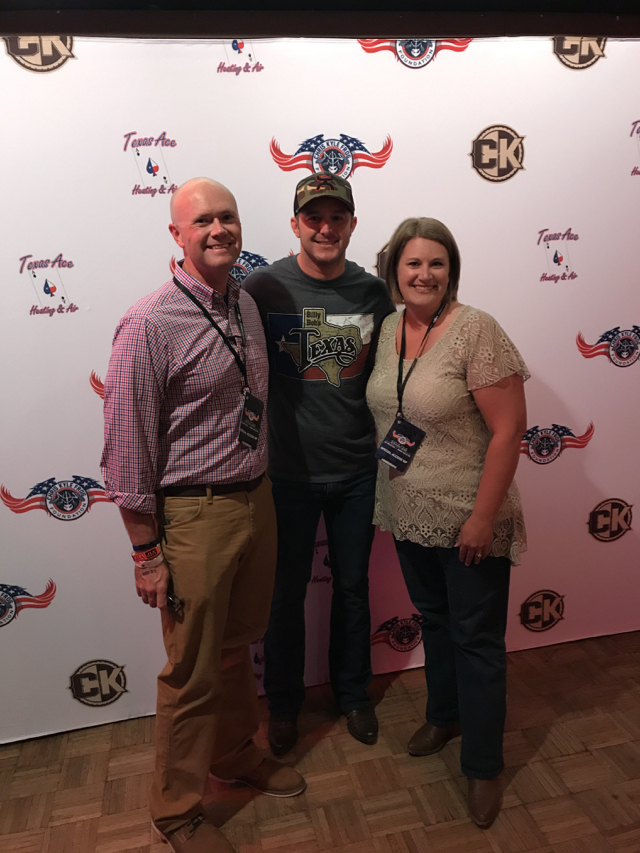 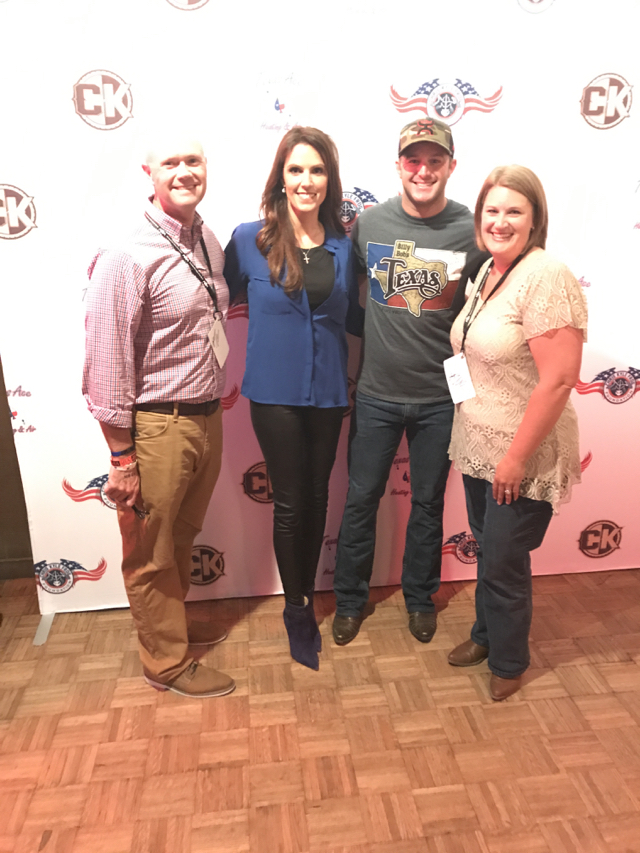 And then we felt like we were the celebrities as all these other people walked up to have their picture taken with us.

From left to right: 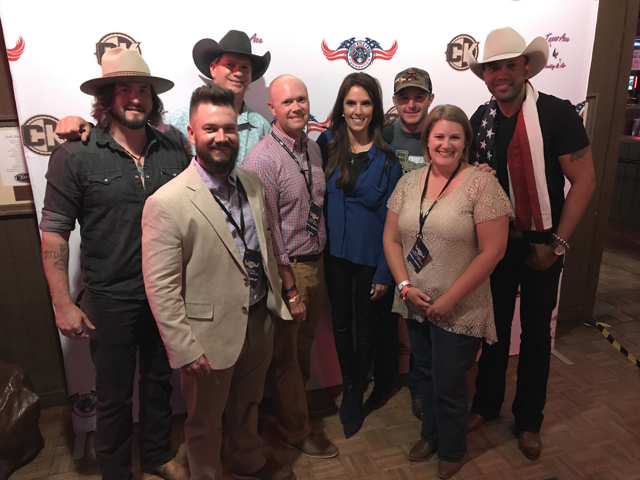 After the photo session we went in to the reception room, chatted with other people, and then enjoyed a mini-concert.  Fun stuff! 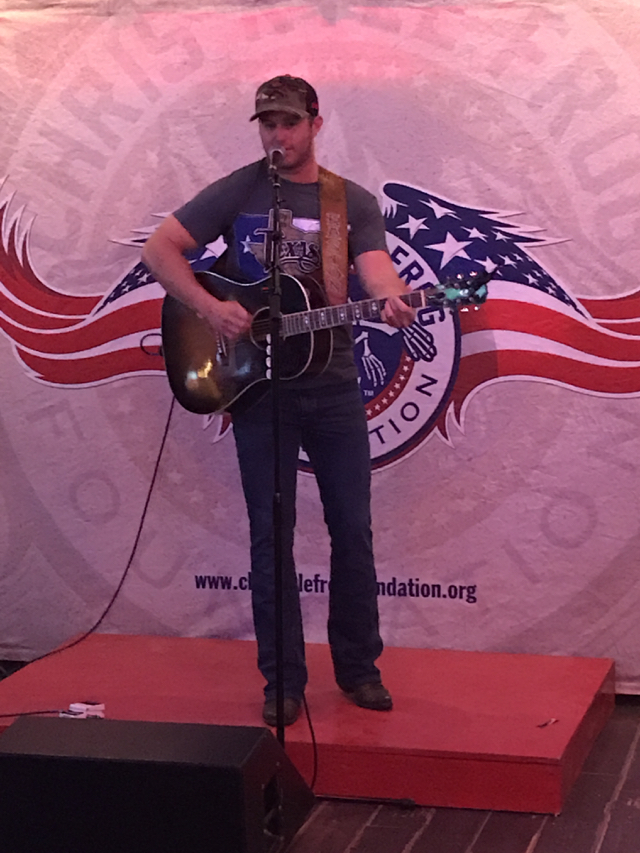 After the concert and reception we walked around the HUGE facility.  Everywhere we tuned were pictures and banners celebrating Chris’ birthday.

Billy Bob’s is a huge attraction in Fort Worth so we took a picture with one of the neon lights. 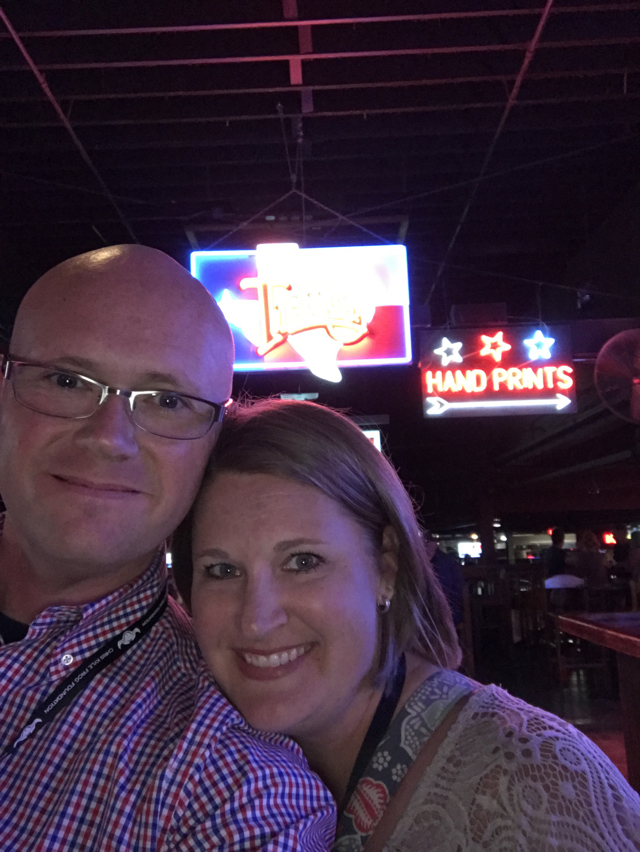 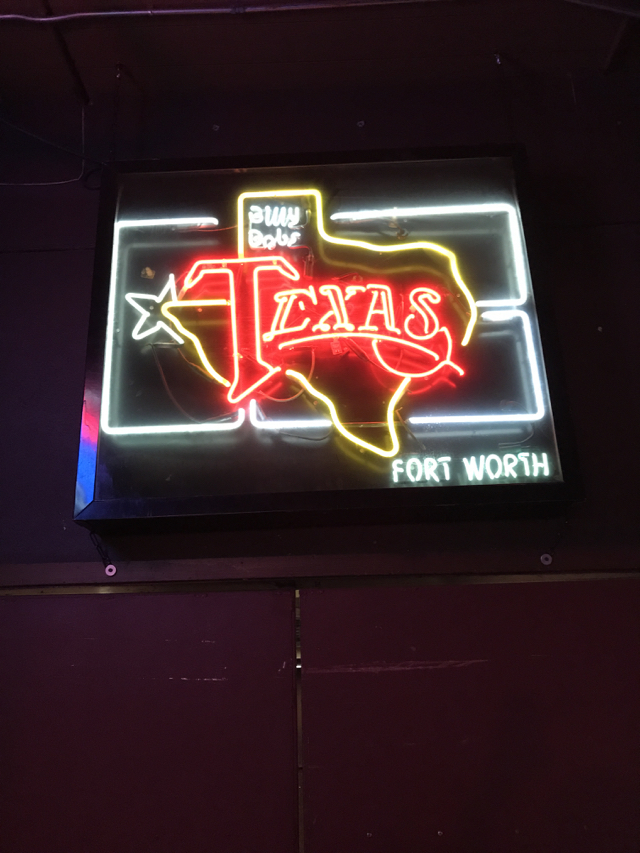 The formal portion of the evening included a few songs and speeches by those who had their pictures made with us. 🙂 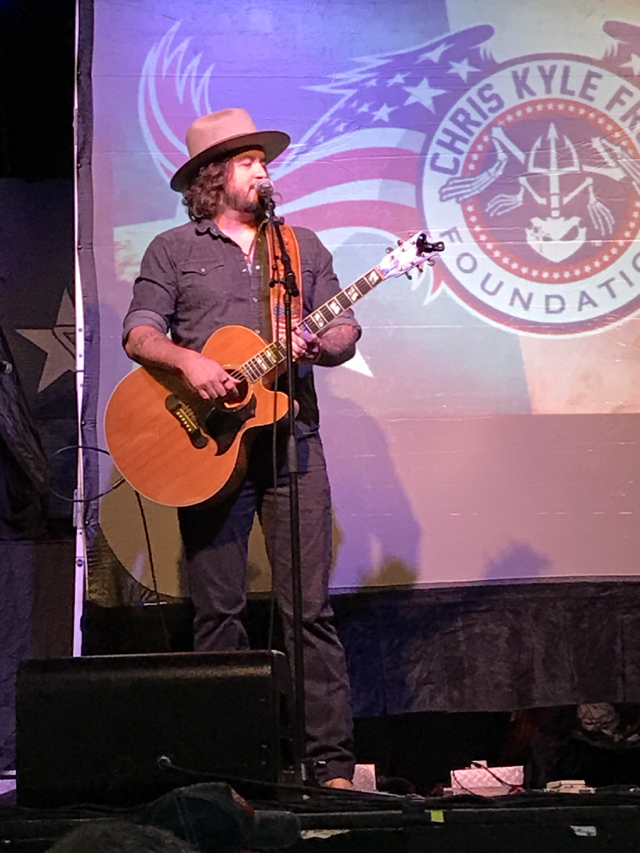 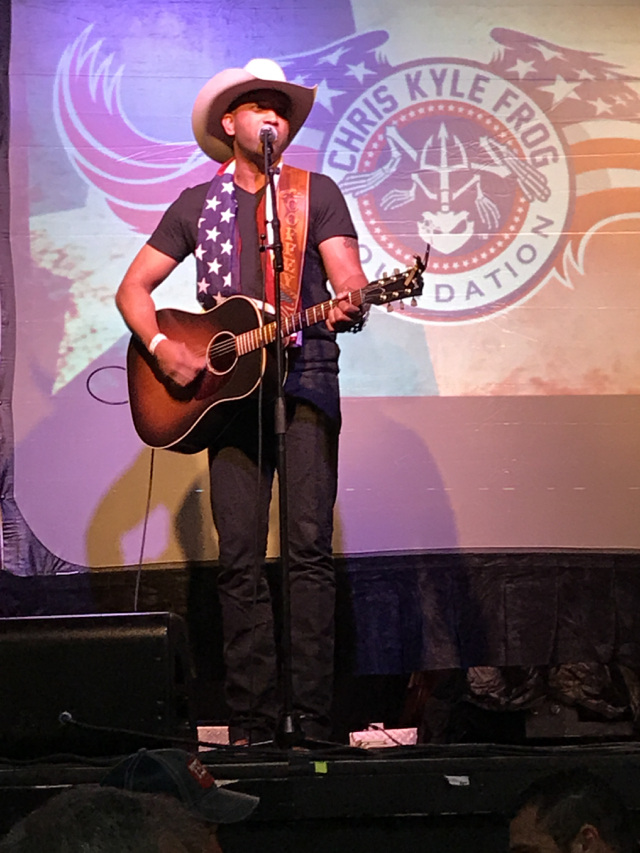 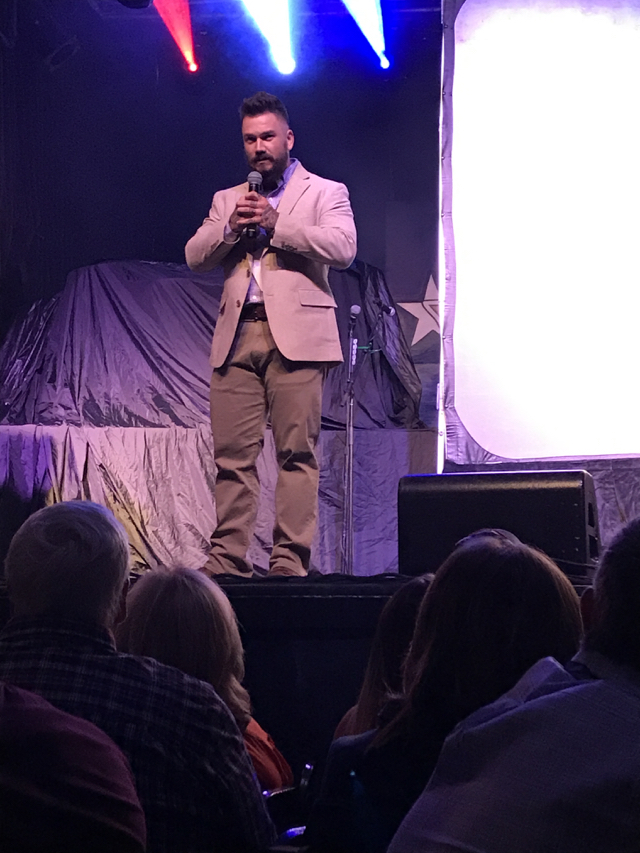 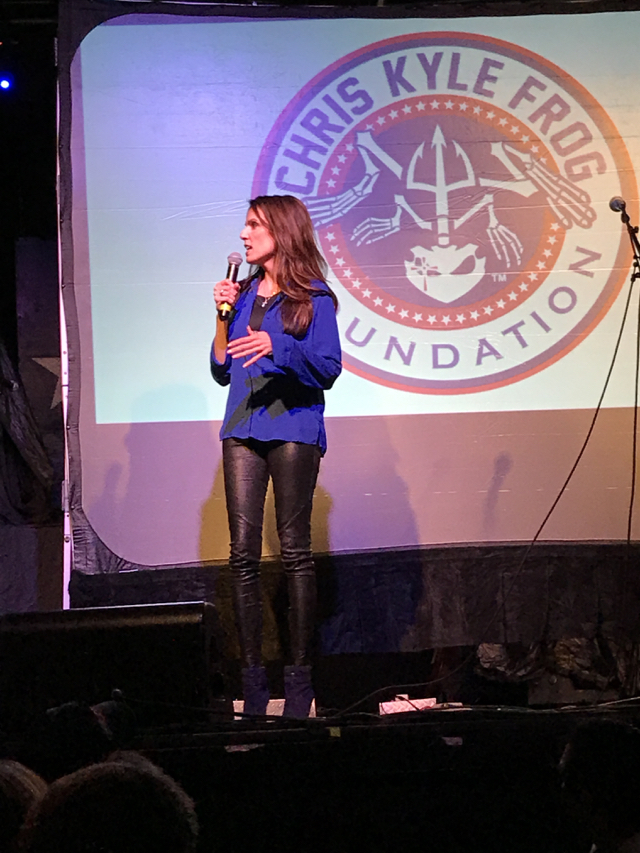 We ate dinner in true Texas style:  BBQ and fixin’s.  Afterward was a live auction during which several really fun things were sold to benefit the foundation… with the goal of sending more couples on retreats like Matt and I are currently enjoying.  (This blog will be posted before we check out of our hotel.)

Here are a few of the items sold during the live auction, and many more were sold before dinner in a silent auction. 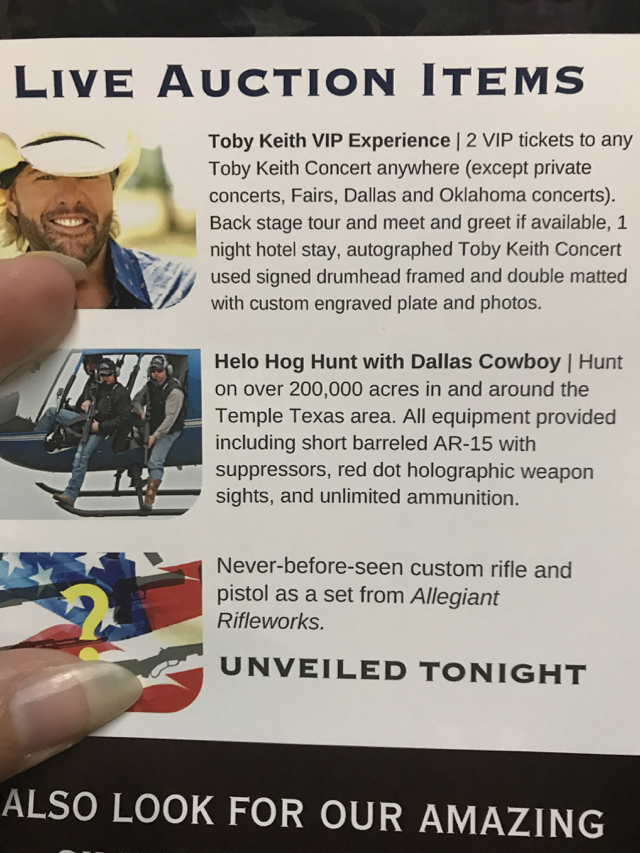 You know… the hardest part of accepting a gift like this weekend is knowing how to say thank you.  Words don’t seem sufficient, and the people giving the gift don’t want anything in return.  So for now, I’m just making the best of the time we have here.  Matt and I have reconnected and enjoyed traveling without having carry a load of stuff.  We miss our kids very much but we are enjoying the laziness this trip has provided.

We walked along the Trinity River in almost complete silence for 45 minutes yesterday.  We stayed up till 12:45 one night watching American Sniper – me for the first time, and then, last night, ordered room service for dinner and went to bed by 9.

It’s been perfect and we really hope that others in our life are able to receive this kind of revitalization!

Another post will follow this one once I get the professional pictures.  I’ll also share a bit more about the Foundation and the good it has done in the past.  For now, I’m going to go relax a little bit before we check out and head to the last part of our adventure… Urban Adventure Quest and Hard Rock Cafe!

4 Responses to If it sounds too good to be true, it might just be true!