When to praise the Lord for a broken arm:

…when it leads doctors to notice a tumor that needs to be removed.

This is a post I’ve hesitated to write for a variety of reasons, the first of which being that I don’t want it in writing because then becomes real.

Other reasons for the delay are homeschooling, parenting, teaching FPU, running, sleeping, etc.  Just normal life has kept me from being able to carve out the time to write this.  As it is, I have exactly 30 minutes to start/finish/edit/add photos/and publish this post… bear with me if you find typos or errors.  I’ll gladly correct them if you’ll let me know about them.

Ten days ago Matt took the bigs and two friends to Magnolia Market because it’s Magnolia Market.  Less than thirty minutes after arriving Carson, who was swinging on their massive swings, slipped and fell.

Matt called me and said that Carson had popped his shoulder out of socket and they were going to head home but only after stopping at Common Grounds for a cup of joe to-go.

Matt dropped our friends off at their home, brought Bailey back here, and then took Carson to the ER.  I was home prepping homeschool stuff (all… day… long…) and by late evening I still hadn’t run/walked/moved.  I suited up for a cold walk in the dark and soon after I left Matt called to tell me that the good news was that if Carson’s arm had been out of socket at all, it was back in… they did, however, find a fracture in his humerus.  I walked to the hospital and then walked laps in the parking lot until they were released.  Carson was given a sling, Motrin, and told to call orthopedics first thing Monday morning.

He managed quite well and has found ways to function in spite of the fracture.  (He learned that if he wanted to read he could sit in a certain way and use both arms to hold the book.  Priorities!)

Monday morning we called ortho and were told the first available appointment was Wednesday… so we waited.

Wednesday I sent Matt with Carson to find out if he’d need surgery, to have the bone set, or if we were just going to wait out the healing process.

I didn’t expect to hear the word tumor, cancer, or bone graft.

Thankfully the word cancer was accompanied by the phrase: “99% sure it’s benign.”

In super-laymen’s terms (because that’s the best I can do at this point), Carson has a tumor in his bone that caused his bone to be basically hollow, which is why it broke with such a small fall.

I leave in nine minutes to take him for his MRI.  We will take the disk with the scan’s results to a specialist (hopefully soon – we can’t make an appointment until we have the disk in hand) and he will tell us more.

So yes, I am very thankful for this broken bone.

The orthopedic doctor who saw Carson Wednesday thinks he has seen a case like this before. With that patient, they removed the tumor and replaced it with either a bone graft or bone cement.  The patient was just fine, and that orthopedic doctor has referred us to the same tumor doctor who successfully treated the other patient.  We are praying that it is, in fact, the same kind of situation.

Your prayers are very much appreciated.  We are trusting the 99% guess and feel at peace, though the words are still tough to comprehend.

Since I have only five minutes left I’m going to go back through this and find any obvious typos, add pictures, and post.
Thanks for reading and I’ll update when I know more.

Friends posing without Carson… he wasn’t in the picture-taking mood at this point: 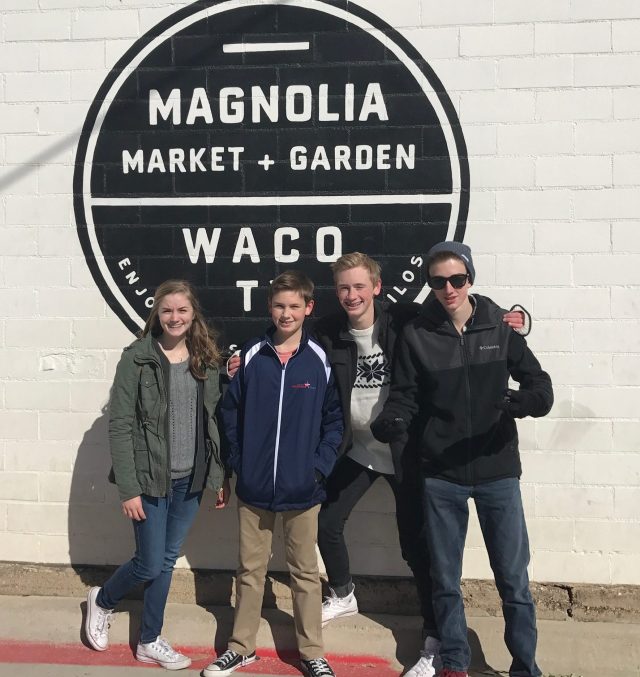 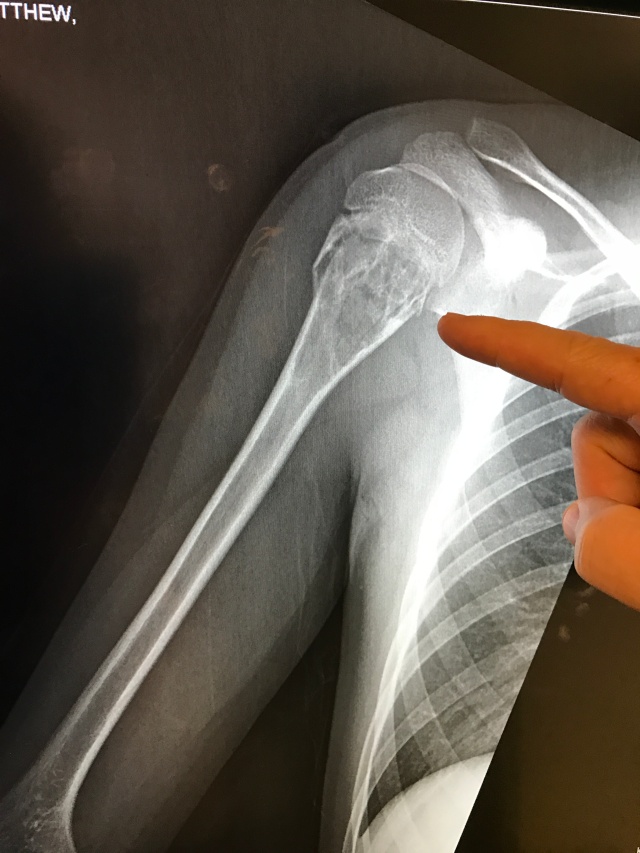 The dull gray is where the tumor is in his bone… if you look at the bottom 4/5 of his arm it’s a light gray but the top fifth is darker gray.  The darker gray is the tumor.)

Our guy in a sling…

9 Responses to When to praise the Lord for a broken arm: