Living in Colorado Springs was a grande experience.  We loved it from the the day we arrived in 2007 to the day we drove away in 2009.

Matt and I have wondered if we would feel the same way about Colorado when we visited or if it was just a season in our lives that was not to be replicated.  Now that we’re back from spending 10 days there I can say that we definitely love Colorado.  Mountains, snow, cool breezes, not to mention, memories of the good times we had there and friends we met in Germany who are now there!

As soon as we pulled onto Fort Carson on November 4th I posted something on Facebook about how “we left our hearts here” back in 2009 and then realized that could be taken the wrong way to those we love in Texas.  While I am the first to admit that I was not happy at all about getting orders to move to the center of the sun, I am now very happy with where we are.  Our lives are great here at “The Great Place” and for the time, I don’t want to be anywhere else.

BUT, let it be known that Hamrick people love the mountains.  There is a beauty in them that we are naturally drawn to and we someday hope to live near them again.

Here is a brief tour of our old stomping grounds.  I didn’t take a picture of our old house because there were kids playing in the front yard and I thought that might be a bit inappropriate.  Not to mention, we were driving slowly, with a cargo container on the roof, and we have Texas tags.  They could have tracked us down and beaten us up if we were caught!  I did however, snap a picture of the street sign.  Good times on Light Fighter! 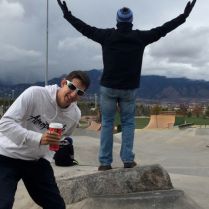 In the collage above you’ll see a variety of pictures from our time with the Joneses.  We arrived in COS on my birthday which meant I got to pick the restaurant for dinner: BirdDog BBQ.  I had been looking forward to that for years and they didn’t disappoint!

Aimee had a delicious Heath Bar Ice Cream Cake at home for dessert!  The next day we knew without a shadow of a doubt that my four handsome men, though amazing travelers would need a way to release some energy. They remembered a skatepark and it was the ONE thing on their list of must-see places, so we made sure to hit that early.

It was pretty chilly, so I didn’t get out my real camera but I did manage to get a few videos of Parker.  He kept trying to get out of the bowl by himself and from a distance he looked like a Whack-a-Mole.  We had so much fun watching him that we tried to get it on video…

Hayden had overheard Matt and me talking about it in the car the day before.  I had told him to keep this from his brothers just in case it wasn’t something we were going to pursue.  Any chance he could catch me alone he’d ask for updates… he was so excited, so eager.  I could tell it was on his mind all the time and I hoped it was something we could go forward with for many reasons, but for one, because he’s such an amazing big brother and he’s been wanting another sibling since Parker was about two.

Aimee and I had briefly talked about it, but there was still so very little that I knew that most of our time was spent catching up and watching “the babies” play together.

There’s something so precious about having friends you can talk to after a long separation and it’s as if there was NO time passed between visits.  It’s also nice to have friends who let you stay with them and monopolize their washer and dryer!  The time with the Joneses was precious.

Today’s update on our Adoption Process:

Yesterday was a crazy busy day!

Secured (READ: paid) the attorney in Virginia so we have officially selected her.

We have done all that we can as of right now before baby comes.  Our Home Study people will tell us what’s next, but as far as I know everything is in their court!

Our sweet birth mother told me that the baby is very active!  🙂  Super excited to hear that!!

"Yes, they're all mine." The answer to the question I hear most often.
View all posts by Jennifer →
This entry was posted in adoption, brothers/boys, family, friends, Texas, travel and tagged adoption, colorado, colorado springs, vsiit. Bookmark the permalink.