A Season of No

I am in the middle of summer in Texas and I’m not hating life.  That does not mean I’m loving the heat, but I believe I can finally say that I don’t hate being here.  It has a bit to do with the fact that this is our third summer here and I’ve learned what to expect but I believe it has more to do with the fact that we’re feeling really established with our lives here.  We’ve gone to the same chapel for two years and have met amazing people there.  The season of rest I’ve been in the past couple of months, which will extend until August, at least, is doing its job.  I’m feeling refreshed and really starting to feel eager to start the fall session(s) of Financial Peace University.

I can assure you that this season of rest has come at the expense of really good things.  We have had to say no to some really great opportunities.  Our family is resting right now and it cost each of us something but the benefits have been well worth it.

I have been able to read more in the past few months and one of those books was, “The Best Yes,” by Lysa TerKeurst.

I am a huge fan of the book, “Boundaries” by Henry Cloud and John Townsend and I’ve recommended it to literally hundreds of people.  I will continue to do so… it’s a must-read.  (Or a must listen-to.  I listened to the audiobook while I ran.)

“The Best Yes” is, in a round-about way, about setting boundaries.  It reminded me that I am right to say yes when I know I should do something I’m asked to do, but I’m just as right to say no when I know I’m not supposed to do it.

I love to hear Dave Ramsey say, “To be unclear is to be unkind.”  I find that is very true… when I am asked to do something, I’ve found it’s best to immediately answer with a no if I know right off the bat that my response is ultimately going to be a no.  That is one way I can be kind to the person asking.  I am giving them the truth immediately rather than lying so that I can delay the discomfort of saying no.  This also gives them more time to find someone else to do whatever it was they were asking me to do.

In addition to being kind to the person asking, I’m being kind to myself.  Having the question hanging out there just waiting for me to answer is stressful.  Wanting to dodge that person because I know they’re waiting for my response is not fun.  I prefer to say no immediately if I know what they’re asking is not going to be a good fit for my life.  Saying no is being kind to someone… that’s a concept that is difficult for some of us to grasp.

Taking my no even farther:  when I say yes to something I’m not supposed to do I’m taking the opportunity away from someone who is supposed to.  I don’t know how many times I’ve almost signed up to (fill in the blank) just because I was asked but I listened to that little voice inside that said was telling me not to, only to see someone else step up to do that task, and with joy.  I can do a lot of things, but that doesn’t mean I’m supposed to.

And here’s the one I am really passionate about: when I say yes to something I’m automatically saying no to something else.  I have a fun story about this, though it wasn’t fun when I was on the phone giving my kind-but-firm no.

Very soon after we moved to Texas I was asked by someone I really respect to lead the AWANA program here.  I think the program is great, but it isn’t really my thing, and I knew immediately that it wasn’t the job for me.  There are times we are called to do jobs that we don’t necessarily want to do, and we should do them, but in this case it wasn’t just a matter of “I don’t want to.”  I really felt in my spirit that there was something else for me even though it wasn’t even close to coming to fruition.

I said no.  The person respected my answer and we remain friends to this day.

Fast forward five months.  Matt and I were running a four-mile route on Fort Hood passing one chapel after another, wondering if we could possible hold Financial Peace University classes in one of them.  Some huge obstacles to overcome included gaining regular access to the building, setting up/tearing down, cleaning, media equipment, and the big one: child care.

On December 31st while visiting family in San Antonio I received a phone call from someone I didn’t know and he asked me if I had ever considered teaching Financial Peace University at Community Connections.*

I remember sitting on the hotel bed wondering if this conversation could possibly be real… what this person was suggesting was too easy, too simple.  I was in awe of my God who had given me the clear no to AWANA five months prior  Now He was giving me the answer to EVERY concern I had been contemplating regarding FPU:  the building was already reserved for classes, DVDs and televisions were provided, there was a free dinner offered beforehand, and child care was already set up.  It was LITERALLY a plug-and-play sort of situation!  Community Connections had been going on all along, I just hadn’t heard of it!

I began teaching the class that my heart longed to teach a couple of weeks later and as of right now, between Matt and myself, we have led nine classes here at Fort Hood (one of those was in Afghanistan for deployed Fort Hood soldiers) and the total financial turnaround that was reported during just our Spring 2015 classes was over $695,000!! 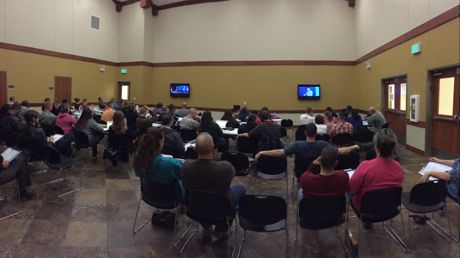 If I had said yes to AWANA, even for good reasons, I would have had to say no to Financial Peace University.

I’m not encouraging you to run around saying no all the time.  Please don’t hear that.  Yes needs to come out of your mouth sometimes.  Read the book, “The Best Yes,” to help you determine when to say yes, and when you’d be better off saying no.

While I am in a season of no right now, I am getting more and more eager for my season of yes to start!  I enjoy doing and I love being around people, so a season of no isn’t necessarily something I would naturally sign up for but I believe fully that God had a very specific reason for my season of rest.  He’s starting to let me in a little on what He has in store for the Hamricks, and I simply couldn’t be more excited for the fall.  And when it gets here, I will finally be able to say yes, and to the very best God has for me!

3 Responses to A Season of No