My sweet love took me on a date last Friday night to Austin.  Not just any date, though.  This was a date Matt had been looking forward to for quite some time.

See, my love is a musician.  He is a great guitarist and can lead worship in chapel very well.  The sound of guitars tuning, amps being tested out (to the max… sorry neighbors), and the comical noise the strings make when he replaces the strings are part of my perception of normal noise.  (Do any other guitarists pluck the strings while turning the tuning pegs just to make that fun noise?)

Austin is the live-music capital of the universe and as you may have guessed by now, our date was to a concert.  I prefer to listen to my music in my car or on my iPhone where I have complete control of the volume, the location, and who is around me.  Concerts offer me none of those luxuries.

That day was “Box Day” around our house which means we finally opened our SonLight boxes (98 lbs of school stuff) and I knew I’d be engrossed in that material all day – by choice, not necessity.  I spent most of the day on my feet.  If I could go back and start over I’d wear my tennis shoes all day!

By the time Matt got home from work and we were getting ready for our date, my feet were hurting, and I was thankful he said to wear comfy clothes.  His actual words were: “because we’ll be standing.”  That didn’t sound strange because I’ve been to concerts before and we did stand a lot.  Keep this fact in mind as you read…

Our drive to Austin was awesome.  We were alone and had a chance to talk without teen/tween ears listening in.  Matt got an earful on the new fun stuff I had spent the day swimming through and I got caught up on his work-related news.  At some point he made a comment about there not being seats at the venue we were heading toward.  Insert sound of a record needle scratch.  Say whaaaat?!?  He seemed surprised that I was surprised and multiple times throughout the night reminded me that he had told me that we would be standing.  I remembered that vividly, but I also remembered the absence of the fact that we couldn’t sit even if we wanted to.  I decided to take this opportunity, which was handed to me on a silver platter, to whine.

I teased him off-and-on all night about this and he teased that he should have left me at home.  Our dinner was great (we’ve found a place with good guacamole; Chuy’s) and surprisingly fast.  We made it to the venue with plenty of time to spare.  We got there and found that we were the first people over the age of 18 to arrive – standing by the door were four giddy-groupie girls who had been there for hours, perhaps.  We walked to a nearby Starbucks for caffeine, and when we got back, we were still the only people there who can remember even a single day in the 1990s.

I took this 90-minute long wait at the door to remind Matt a few times that my feet hurt.  By this point it was just fun to mess with him.  He told me that after that night I would be paid-up for the coffee mug I stole from him several years ago.  (He won a stainless steel coffee thermos at work once that keeps coffee hot for hours, no joke.  I used it when we held a yard-sale in Germany and I never gave it back.  He often accuses me of stealing it from him, and I don’t deny the charges.  I’m glad that I’ve paid my debt in full, now.)

For you concert-lovers, I bet you’re dying to know who we were seeing… I’ll be nice and tell you that we were there to see Dave Barnes and Matt Wertz, with Jon McLaughlin opening.  Moving along with my story…

Matt had purchased the VIP tickets so that we could get in early, get our space, meet the artists, and generally, be very-important-people. I thought one of the groupie-girls was going to pass out as she waited anxiously to enter the gate and I wanted to take her Sonic cup of ice and gently throw it in the trash for her.  (Think rain-maker/shaker/mini-drum… let’s say it was on the verge of being annoying.  And let’s just say that if you detect some sarcasm then your sarcasm-meter is working properly.)   Once the VIPs were allowed in we were directed to the front of the open-air room near the stage where the musicians were to come out for a meet-and-greet session.  Groupie-girl was visibly shaking by the time we were in place to meet the stars.  I felt oddly out of place – knowing I probably couldn’t pick the singers out of a lineup.  Sure enough, one came out to meet a VVIP (very VERY important person) and groupie-girl almost lost it.  Matt kindly let me know that THAT was Dave Barnes which gave me a heads-up to prepare myself for the possibility that I may need to catch groupie-girl were she to faint.

Before we knew it it was time for the official shake-and-howdy: groupie-girl first, Matt second.  I shook hands but stood back to take pictures, rather than get in them.  Dave Barnes had sent Matt something while Matt was in Iraq, so Matt brought him a few patches and cool Army stuff.

We sat on the railing (oh so comfortable) for the next 45 minutes watching the ever-so-awkward gushing of star-struck individuals as they met the musicians.  Once all the VIPs were through, Dave Barnes and Matt Wertz performed two songs right on the spot.  I was immediately impressed.  They were really good, although it didn’t surprise me, as (my) Matt is a pretty good judge about these things.  If he thinks they’re good, they must be. 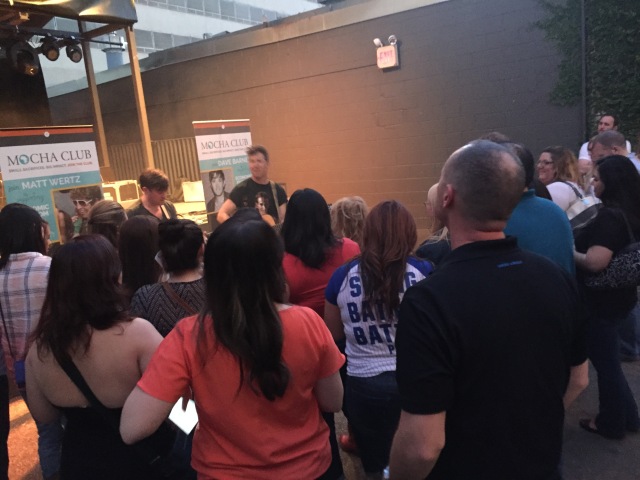 After the two special songs Dave and (the other) Matt went backstage to do whatever musicians do backstage while the rest of us milled around (staked our ground) and watched all the NON-VIPs enter.  The front of the stage was packed full of people, but when a few wandered away we made our way to the stage, which turned out to be the absolute perfect spot.  We had something to lean against to help take the pressure off our feet (okay, MY FEET) and we had a very convenient place to set our drinks.

When 9:00 finally arrived, Jon McLaughlin began his set and I have to say, I was very impressed.  I videoed several clips for Carson, who is our resident pianist.  At the bottom of this post I have included a video compilation of those clips for anyone interested in them.

After the opening act finished, he went back to join the other musicians backstage.  I found myself hoping the pianist would join the other two singers for a song or two.  Not only did he join them for a few, he was there for almost every song the rest of the night.  Incredible music!

This picture shows the pianist, Jon McLaughlin, off to the right, with Dave Barnes in the distance and Matt Wertz in the foreground. 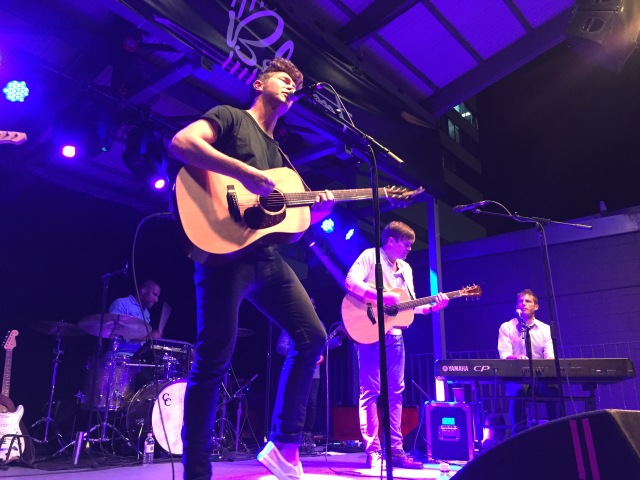 While listening to the music so many thoughts crossed my mind.  Some were quite comical, like the odd fact that I couldn’t see groupie-girl anywhere, that the girl behind me has a “Janice” laugh, and that her friend, (or maybe it’s her, bless) can’t sing at all, but enjoyed doing so… and loudly.  The pianist has a great guitar-face, only, I guess it’d be a piano-face, since he doesn’t play guitar.  (Music fans, think John Mayer’s guitar face.  If you don’t know what I’m talking about, but are curious and might need to smile, google “John Mayer guitar face.”)  Matt Wertz has a Michael Jackson + Elvis Presley stage presence, while Dave Barnes is calm, cool, and collected.  One thought I had, repeatedly, actually, was that I didn’t deserve to be on the front row.  I knew in total one song: everyone else in the room knew all of them, and probably knew what each of the musician’s favorite foods are.  In fact, the lady beside me had been to their Houston concert the night before, was (obviously) at the concert in Austin, and had tickets to their concert in Dallas the next night.  That’s dedication.  And I felt my inadequacy each time I got the stank eye from the girl to my right and back a row.  I believe she was genuinely jealous that I was in the spray zone and she was a whole three feet behind me.  I was not about to give up my treasured wall that I needed to lean on. 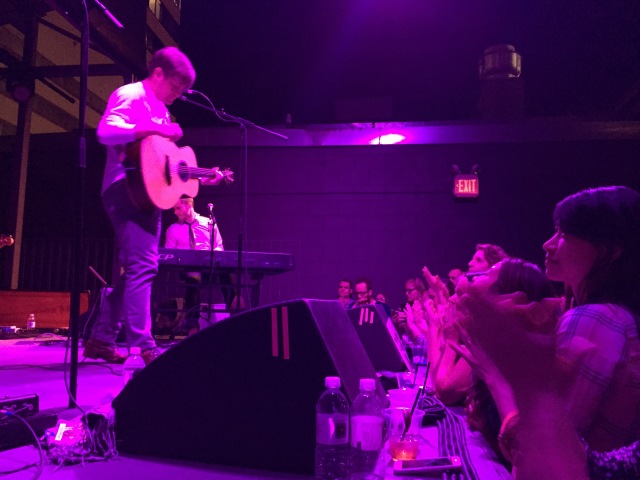 Some of my thoughts were practical, like the fact that the smells in the place varied greatly from hamburgers on the grill (nearby restaurant, perhaps?) to freshly cut wood, to the inside of a guitar case.

And all of a sudden, the song started.  The one song I knew.  It was a song Matt had put on a special playlist for me when I was pregnant with Parker.  I listened to that playlist on repeat while I was in the hospital after Parker was born, and for the next year while I rocked our sweet little one.  Those songs are special to me even though I had no idea who most of the artists are.

And within a few measures of the song I was crying.  And singing.  I deserved my spot after all!  I could sing along and cry with the best of ’em.

On the left is a list of my Playlists: The fourth down is the one Matt made for me. On the right is a screenshot of a few of the songs on the playlist, with Until You being the fourth one down. Dave Barnes made the playlist a second time with “Crazyboutya.” Unfortunately they didn’t play that at the concert.

I didn’t know this until just now as I was going to through my music looking for the title of that song, but he is also the artist who sings “Crazyboutya” which is a song I used in Parker’s birth story video.  That song is also super special to me. 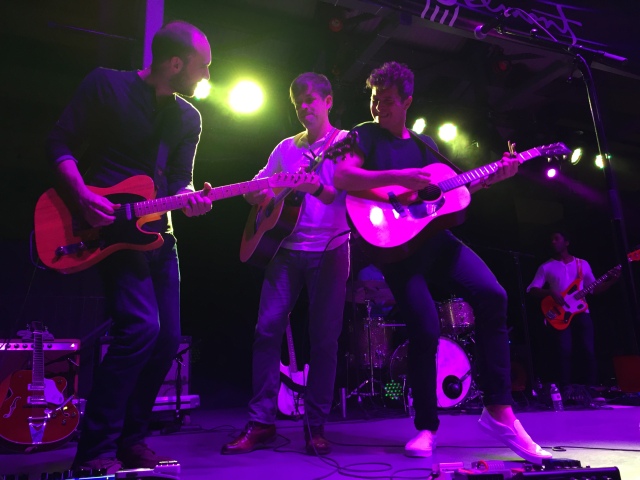 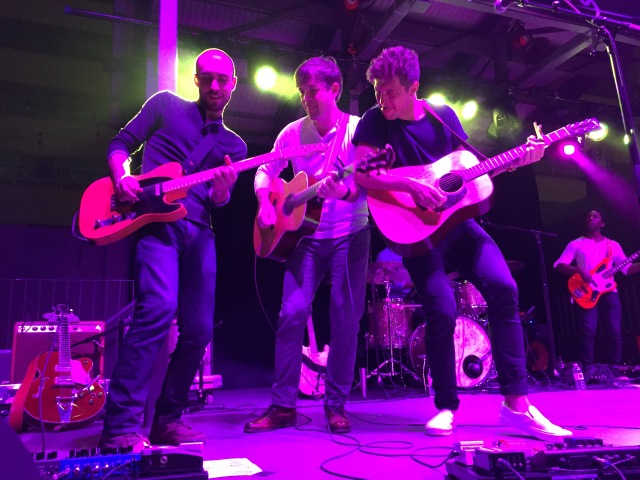 I’m pretty crazy about my guy.  Crazy enough to stand on my feet for hours to get into a venue hours before a concert began in order to meet someone I wouldn’t recognize, only to stand for several more hours to hear one song I recognized.  Yes, all of the songs were great, but ultimately, I was not there to see someone famous, or even to hear incredibly talented musicians.  I was there to stand by my guy; to be with my man; to hold hands and to be held by him while I hid the fact that I was crying like a sap, transported back in time to a place and time I hold most dear.  And the one song was a song my love had selected just for me as a reminder of how much he loves me.

I am a very blessed woman.  And today happens to be his birthday, so Happy Birthday Matt!  I love you and KNOW just how blessed I am to be yours!

"Yes, they're all mine." The answer to the question I hear most often.
View all posts by Jennifer →
This entry was posted in family, marriage, Texas and tagged austin, concert, date, date night, dave barnes, jon mclaughlin, love, marriage, matt wertz, texas, the belmont, TX. Bookmark the permalink.

2 Responses to Until You…