Sacrifice of separation, but not the kind you are thinking of…

I recently wrote about our most recent reintegration experiences.  That time of relearning what life is like as a family.

The first two weeks that I force Matt to “vacation” at home allow him a chance to unwind.  Deployed soldiers are on guard 24/7.  They live in the battlefield.  It’s not like they retreat from the battle… sure, they’re fairly safe on their FOBs, but the very term, FOB, indicates their location: Forward Operating Base.  “A base at the forward of the fight.”  Right there.  In the middle of it all.  So those two weeks of mental and physical vacation helped Matt settle his mind and spirit; to recognize in the deepest of places that he was home and safe.

I had a conversation last week with some fellow 1-227 wives during which one recalled a documentary she had recently watched.  The documentary stated that one possible reason that PTSD has become so much more prevalent after these wars is that soldiers go from the battlefield to the home in a 48 hour period.  In past wars, soldiers spent 2-3 months with their battle buddies on a ship, debriefing and decompressing; realizing slowly that they were no longer on the battlefield.  I shared this insight with Matt and he said that he had heard a similar insight about soldiers sleeping in the middle of the battle also adding to the increase in PTSD.  Sleeping on a FOB… as our soldiers do in Iraq and Afghanistan.

Matt is so glad to be home.  He loves being home and he is fully engaged here with us.  But he misses the guys he served with.  Some have already moved on to new duty stations; some are still in Afghanistan, wrapping up our unit’s final responsibilities.  Some have changed units already, and Matt will later this month.  Living 24/7 with people in a dangerous situation creates bonds that I will not ever completely understand.  And I recognize that in a 48 hour time period, Matt had to say “see ya” to many of them.  Sure, he sees some of them at work, some around Fort Hood, others via Facebook or text, but that’s totally different from living/sleeping/working/eating together.

Almost all of my non-military friends have wished Matt well, prayed for him, sent him cards or packages, thanking him for his service.  You know well of the separations from family that he has endured.  You know well that he was in a place where bad things happen.  You know well that he was willing to risk his safety “for God and Country.”  I just wanted you to know that the sacrifices didn’t end the moment his boots hit US soil; that there are sacrifices he has made or still makes that he doesn’t share.  Even with me.  Sacrifices that are almost too sensitive to talk about.  If his Army buddies read this, they might fully agree but I doubt they’d too loudly shout AMEN.  They’re tough, battle hardened men who only share their hearts when they really feel safe to.  And speaking of that, I had the incredible honor of being at a small party Friday night during which this happened.  I saw these guys who have served our Army so bravely share from their hearts how they feel about each other.  There was plenty of laughter going around and one ended up in the pool fully clothed (we made sure he didn’t have his phone in his pocket) but what I took away from that night was that this group of soldiers are forever bound together by their experiences.  I simply could not believe I was in their presence as they spoke.  I didn’t want to make too much noise laughing at their stories for fear that they would notice an outsider among them and quiet down.  They were in their own world.  They were back in Afghanistan, but not fully.  They were safe and their guards were down, and they were sharing the funny stories about flying mostly-broken Apaches, how one used a sausage to prop his TV up… the scary stories about firefights that took them by surprise and about landing near IEDs that ended up being nothing more than PVC pipes.  They told about being awake for days on end and having to brief Generals in their exhaustion, and they told about being woken in the middle of the night to fly missions… about how dirty one of the officers kept his room and about how neat-freak another one was (to the point that he ordered a vacuum off Amazon just to keep his office clean).

These guys… they sacrificed time away from their families.  We all know about that sacrifice.  I know about that sacrifice.  And now that they’re home (at least most of 1-227 is home) they are sacrificing in a totally different way, and it’s tough.  They’re glad to be home with their families, definitely, but this is a different sacrifice the US has asked them to make.  And they try to do it with grace and humility, mostly because they are too tough to do it with anything less than grace and humility.

Matt is home, and he is excited about this next amazing step in his career.  But he will forever be a part of 1-227 and 1-227 will forever be a part of Matt.  The bonds he created in Afghanistan mean more to him than he can relate to me, but I feel it.  I’m honored to be married to someone who sacrificed in service to his country by joining the military, and has deployed twice in her defense.  His sacrifice is continual.

Here is an image of Matt and some of his battle buddies during their patch ceremony.  These patches mean a great deal to the soldiers who wear them on their sleeves. 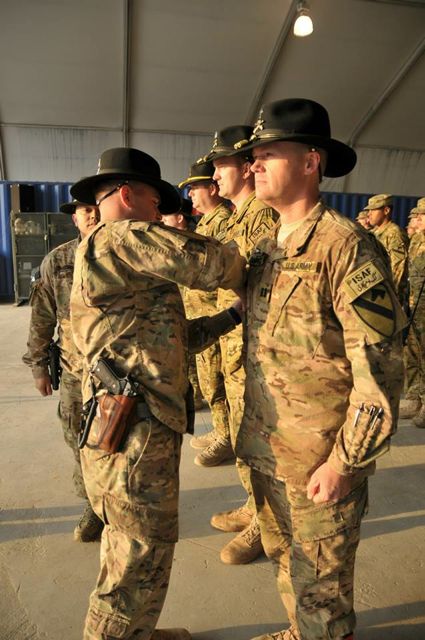 So there is, of course, the sacrifice of a soldier separated from his or her family, but when that solder returns, he or she faces a new kind of separation, and one that few really ever talk about.  I just thought you should know.

"Yes, they're all mine." The answer to the question I hear most often.
View all posts by Jennifer →
This entry was posted in family, friends, military. Bookmark the permalink.

2 Responses to Sacrifice of separation, but not the kind you are thinking of…