Sounds from the first day of school…

Today we are starting school for the 2013-2014 school year. The sounds that I’m hearing as the boys wake up are cracking me up. I thought I’d share:

Parker is singing the intro to a Toby Mac song, “Captured.” He’s singing it over and over again. And then again. Carson and Bailey are discussing what they used to think the first few lines said.

Carson is putting away dishes. I’m a mean mom and have now told each of the boys they have one chore before they even eat breakfast. Hayden and Bailey have to clean their rooms before they eat, Carson must empty the dishwasher. The purpose of this new form of torture is so that they can put away their own breakfast dishes after they eat. I was tired of having to wait for Carson to eat, sweep and finally empty the dishwasher before I could clean up the kitchen. This way, THEY can clean up the kitchen as they go! Since I had Carson do a chore before breakfast, I assigned the other boys before-breakfast chores, as well.

Parker is inspecting some Cars toys he has, asking all sorts of questions about “the smoke thing” and other parts on the car. Bailey’s answering as best he can.

Hayden just pulled out the reserves of cereal I had stored (read: hidden) in the pantry. I think they’re going through about a box a day and I just told them that I will not be buying more cereal until 15 AUG. They don’t seem to know how to pace themselves. They’ll be eating oatmeal and toast as soon as this runs out. It’s going to be a long 10 days…

The timer is beeping… Our cinnamon roll muffins are done. The ones Hayden woke up extra early to make as a surprise for our first day of school.

(Family bliss for 30 minutes…. followed by 20 minutes of unglued moments when I discovered one of my kids didn’t clean the upstairs bathroom because he was out of cleaner. Um, really? We have WATER people!!)

Back on track… timer beeping to remind me to thaw the shrimp for dinner-for-lunch.

Pencil sharpener, a few comments about what kind of garlic bread we’re probably going to have, and a few attempts by big brothers to capture Parker’s attention (as a method of distracting themselves from the handwriting practice I’ve forced upon them). 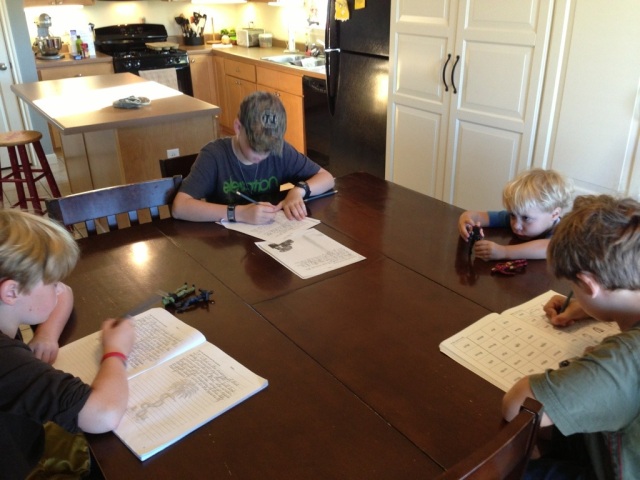 "Yes, they're all mine." The answer to the question I hear most often.
View all posts by Jennifer →
This entry was posted in About my faith, brothers/boys, family, homeschooling and tagged first day of school, homeschool. Bookmark the permalink.

2 Responses to Sounds from the first day of school…