We’re in Brentwood because we wanted to stop in and see/meet Dave Ramsey before we move to Texas.  His radio show is on the glass so guests can stop in and visit during his live program, and we’ve made a sign in hopes of getting his attention.  I’ll show you a picture of that later.

On our drive, other than the obvious gas/food/potty stops we also stopped at Knife World and the Lodge Cast Iron clearance store.  I got a 12″ skillet for $27 that I’ve seen for $45 at stores in Columbia.  Pretty excited about that!  The boys saw a knife in the shape of a grenade. They were pretty excited about that.

Because we arrived in Brentwood on Saturday evening and Dave’s show isn’t live on Sundays, we were able to simply rest all day yesterday.  A couple of the boys got a little pink at the pool.  Oops! 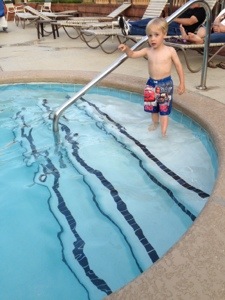 I unloaded the Big Mac and worked on our budget, added Adventures in Odyssey to the boys’ iPods, and uploaded pics from my Nikon to the hard drive and an external HD. Work that had been neglected during the past two weeks.

Saturday I got three miles in, yesterday six.  I never touched the heart rate monitors, so no idea why it had my heart rate at 179… no idea.

Sunday was just a great rest day and today is a day of excitement!  How often in life do you get the chance to meet someone who has helped thousands of people change their lives for the better?  Someone who has made a huge impact on your own life?!?  (No kidding… the butterflies in my stomach rival those I felt while standing in line for The Intimidator at Carowinds!!)  I sure do hope nothing happens to cause him to not be in the studio today.  According to his assistant, he’s scheduled to be on the air, so we can only pray all goes as scheduled!

After our stop at Dave’s offices we’ll head to Memphis, TN.  I’ll check in later!

All about our PCS from SC to TX:

Tschuss, SC!
First stop:  Brentwood, TN  (YOU ARE HERE)
The Hamricks meet Dave Ramsey!!
Second stop:  Memphis, TN
Third Stop:  West Monroe, LA
There was actually a stop in Tyler, Texas one night, between West Monroe and Killeen. There are two posts about that night, out of order. I have no idea why I didn’t catch that Killeen was our “fifth stop” as I was writing these.  Had a little on my mind…  Those two posts are Parker and some PCS Fun and I might have to eat some crow.
Fourth stop:  Killeen, TX
More on meeting Dave Ramsey…
Parker and some PCS fun
More from West Monroe.
I might have to eat some crow.

"Yes, they're all mine." The answer to the question I hear most often.
View all posts by Jennifer →
This entry was posted in Discussing debt, family, military, travel and tagged army, dave ramsey, fpu, move, nashville, pcs. Bookmark the permalink.