Our 14th Anniversary via Jen’s iPhone

It’s been several years since Matt and I were able to go away for our anniversary, so when my mom offered to watch the boys for the Memorial Day weekend Matt and I took her up on it.  Our original plan was to go to Charleston since it’s close and cute.  After a few strike-outs on hotels I handed Matt the planning reins and he went a completely different direction.  In fact, he kept the destination a secret for a long time!  I asked if we were going somewhere we’d been before and his answer was truthfully hesitant, “Sort of.”

We did go to one location that we’d been to before, but the majority of our time was spent in a new place.  The ultimate goal of this trip was to relax and do as little as possible, especially with a PCS just around the corner (our packers start Friday… two days from now).  Matt and I typically plan vacations that are jam-packed with things to do, places to see, experiences to have.  This was a different sort of trip, for sure.

With the packers coming in two days I don’t believe I’ll have time to unload pictures from my camera and do this post justice.  I hope to come back once we’re settled in and do a few more posts with better pictures about these really fun days, but for now I’ll share our anniversary trip according to my iPhone.

We drove half-way to Mom’s on Thursday to do the hand-off of boys, and we left there prepared to go run afterwards.  We decided to run the Riverwalk in Columbia, a really pretty place perfect for such exercise as long as you’re not trying to keep four boys from jumping into the water.  We decided to run three miles and then walk the rest of the way back to our car.  It was vacation, afterall.

Matt revealed to me where we were heading:  To Blairsville, Georgia, to a cabin in a quiet place, with very little to do.  It sounded perfect!  However, on the way we were going to stop by Currahee and visit the museum again and run the mountain!  Matt had accomplished this feat on his 30th birthday, but I had not yet started running.  This was my chance to run it!

The museum is always fascinating, especially since it houses a real stable that they found in England and brought back here to preserve.

We bought our “I ran Currahee” shirts while we were at the museum, before I actually ran it.  The “first-born” in me had a hard time purchasing it when it wasn’t true! We changed clothes in the bathrooms in the lobby of the museum and left from there, directly to Currahee mountain. 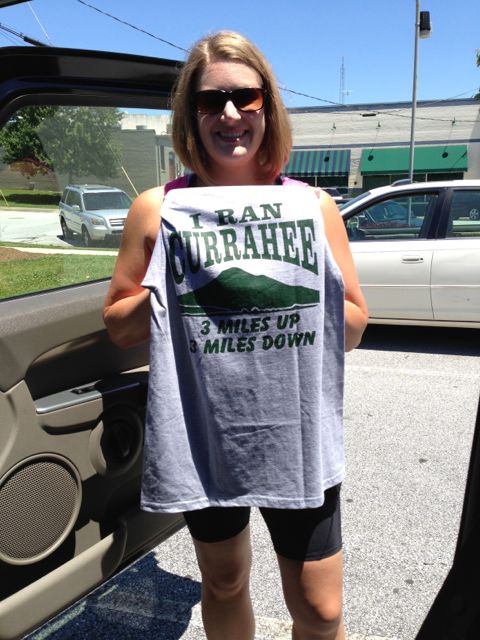 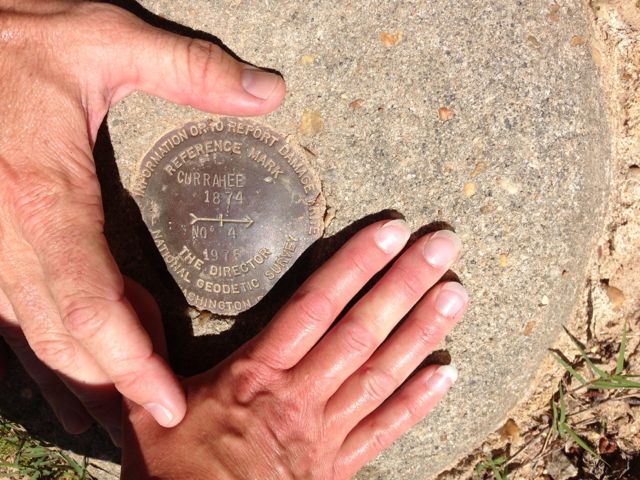 Here we are after running the mountain; successful, sweaty, and proud of ourselves.  This made my shirt “true.”

We drove to Blairsville, signed into our mountain cabin, and started the relaxing part of our vacation. 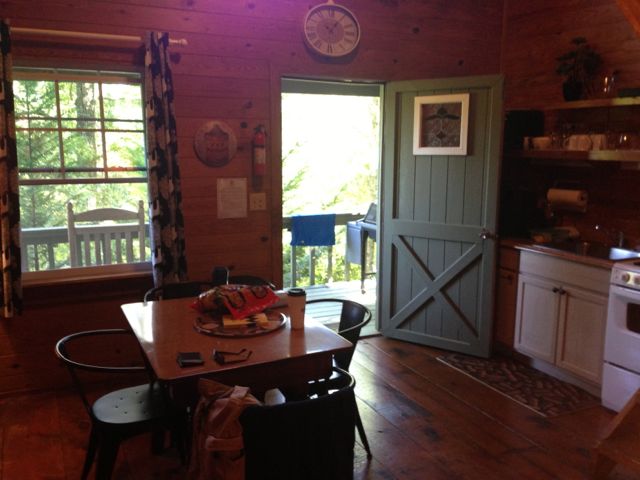 Look at that nice, long train I had going!!  We played Mexican Train and Hill Rummy several times while there. 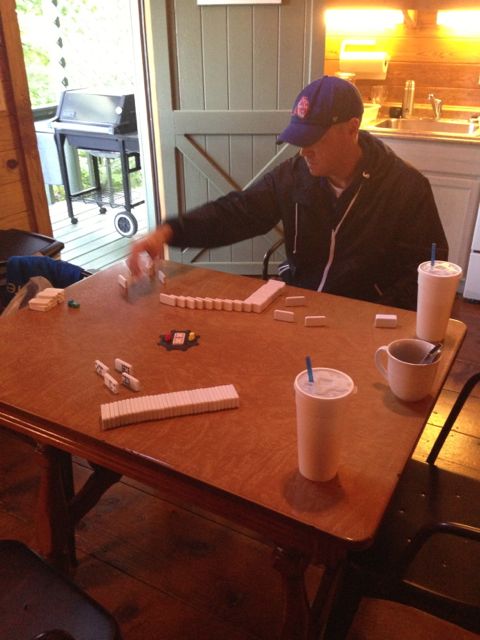 We also ran every day.  The day after our six-mile beast-of-a-run we did a short two miles (Matt ran three) at dusk, on the street our cabin was on.  The next day we ran four miles through the town of Blairsville, but since the sidewalks run out about a quarter mile away from the center of town (on all the streets branching off the center) we made several loops and our final path ended up looking quite spastic.

For dinner two nights in a row we ate at Jim’s Smokin’ Que.  It very well may be the best BBQ I’ve ever had.  I highly recommend anyone in the area try this place! 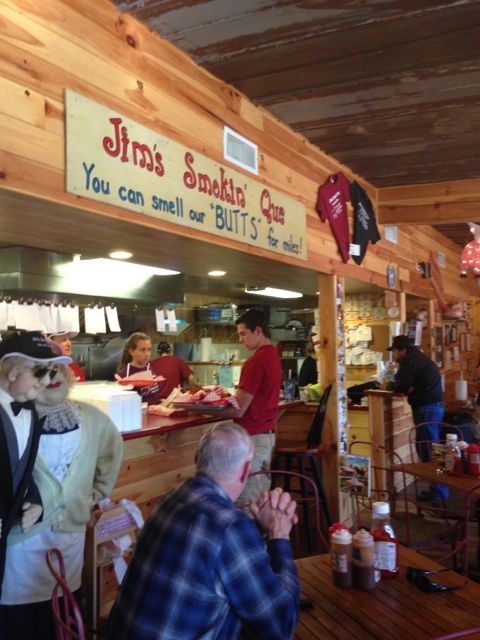 And the reason Matt picked this trip to Blairsville in the first place was because of a little town that is built to look like a Bavarian town.  He knew that with me missing Germany so badly over the past few months that this was a way to “take me back” in a sense.  We were warned by the cabin owners that this place is full of college kids and bikers, and basically just a tourist trap.  It was surreal, seeing the buildings that looked like those of Garmisch lined with a street full of huge SUVs, massive pick-up trucks, and minivans.  There was one particular store that authentically looked (inside) like a German shop.  I stayed in there as long as I could without raising suspicion of being a thief.  Everything was so expensive.  Glasses that we could get for 4€ in Germany were selling for anywhere from $15-30!  Crazy!

We ate lunch at a place that advertised Doners.  We know doners aren’t German, but are Turkish, but that’s one food we really miss.  We both ordered it and enjoyed it, but it tasted nothing like the doners we ate at our nearby Oners Garten.  Oh, man, I miss doners. 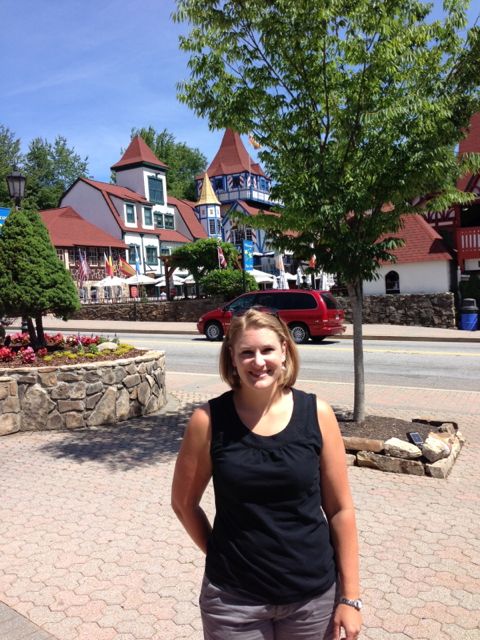 Our whole weekend was lovely, and we enjoyed our time away, just the two of us.  In our wedding we were challenged to “dialog daily, date weekly, and depart annually.”  We talk every day, we date monthly, and we depart as close to annually as we can manage.  The challenge was a good one, and we appreciate the minister setting it before us.  After all, once these kids are grown and gone, we’ll be left looking at each other and we don’t want to get to that point and wonder who the other person is. 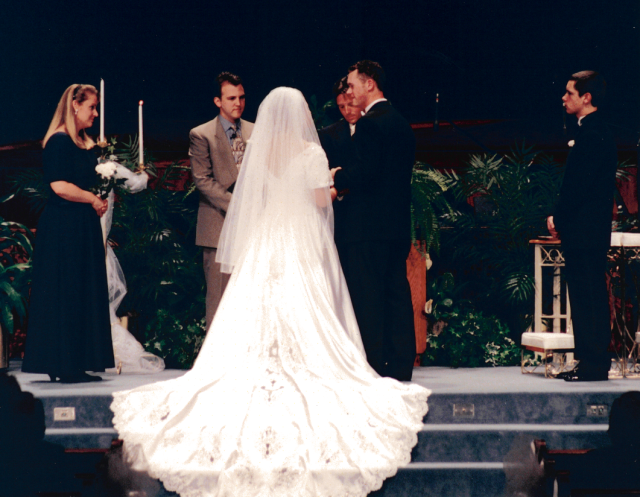 Hey, Babe, thanks for the adventure of the past 14 years!  I look forward to the next 14 and beyond!

"Yes, they're all mine." The answer to the question I hear most often.
View all posts by Jennifer →
This entry was posted in family, germany, marriage, running, travel. Bookmark the permalink.

2 Responses to Our 14th Anniversary via Jen’s iPhone