We have a goal/rule after each PCS:  To be done unpacking and decorating by the one-week mark.

Matt and I agree that this move was much more difficult than all our others.  The unpacking and setting-up-house was much more taxing and physical than all the others. It’s surely not because we’re getting old, ’cause that’s not it at all.  In fact, we’re both in better shape than we have ever been.  We think it may be because the packers who packed our stuff in Germany didn’t keep the items from each room together.  Add to that the fact that we combined two boys’ rooms into one, lost a bedroom, and the living areas downstairs are a LOT smaller than our Wiesbaden house.

I don’t want to give the movers in Germany all the blame.  Instead of delivering all our goods last Monday, and removing everything from the boxes that day, they delivered our stuff on two days and sent a second crew back on a third day to unpack us.  They told us that they’d send yet another crew back to put together our huge school cabinet.  When the unpacking crew came we let them leave without unpacking anything that was supposed to go in the big beast because we literally had no where to put it until we had the cabinet assembled.

Today is Tuesday.  We have still not heard a single thing from the assembly crew.  We sort of expected that to be the case, which is why we tackled the job ourselves.

All of that to say, our “one week rule” had to be extended and we are counting tomorrow, Wednesday, as our deadline.  We have the office, as I mentioned, left to finish, as well as a few piles of stuff at the top of the stairs.  I think I’m going to find a few totes and label them, “Stuff that doesn’t have a place but I don’t want to throw away.”  Sounds reasonable.

Here are a few pictures from the past week:

This is about as decorated as the boys’ room is going to get.  They are thrilled with the jerseys and I’m cool with that.

If you only knew how excited I am about being able to park my car in the garage…  Matt made this happen and I’m so thankful! 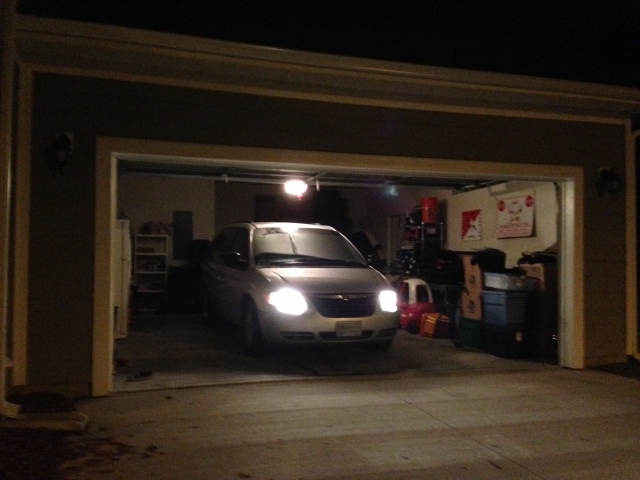 After a couple of months of using other peoples’ coffee pots, I finally found the one I wanted.  I had borrowed one almost identical to this one from sweet friends and knew I wanted it.  I had to go to six stores to track it down, but I scored when I finally found it. They had no more in boxes, so I asked if I could have a discount on the floor model.  It was already on sale, so I really got a good deal.  Today I saw the same one at another store and I got mine for $100 less!  And I bought it at BELK which is an expensive store, in my opinion.  Yep.  I’m happy, happy, happy.  (Name that TV reference.)

I’m excited to show you a few pictures of my downstairs.  Our big success tonight was the curtains!  I LOVE THEM, and especially that I was able to use curtains I already had!   The hardware for our curtain rods were lost in the last move (from Colorado to Germany) so we had to purchase two new curtain rods (hardware cost almost as much as new rods so I went with whole new rods).  I’m thrilled that I found some at Target that have wrap-around ends.  I can drag the ends of the curtains all the way to the wall to keep light from coming in the sides.  I got so spoiled by these type of curtains in Germany. I’ll be going back to Target for a third set for my bedroom.

Standing in the doorway with the laundry room/bathroom/garage behind me:

My view while I wash dishes.

Over near the table, I turned around and took a picture of the kitchen.  The picture over the doorway is one I took during a girls’ night out at Nonnah’s in Columbia, the last time we lived here.

I turned and took a picture of the living room from that same spot, over near the china cabinet.

And the panoramic view from my very own recliner.  Love my home!

"Yes, they're all mine." The answer to the question I hear most often.
View all posts by Jennifer →
This entry was posted in family, germany, military, travel. Bookmark the permalink.

5 Responses to Getting settled in…