And not even half-way anymore.

Yesterday when I mentioned being half-way done, I was referring to the unloading of all our goods… today we unpacked and unpacked and unpacked… and then the unpackers arrived and finished up.  But of course, we had finished unpacking between half and 3/4 of the boxes.  I was less than thrilled, but we had to get started on this process.

This picture was taken this morning at the start of the unpacking party. 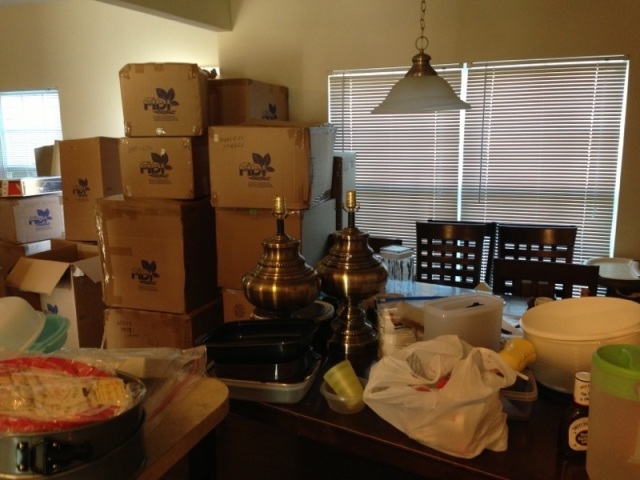 Sorry it’s blurry but you can see what chaos occurs during the unpacking stage.  Take note of the bar…

They left, and are sending a third crew out to put together the homeschool cabinet that most of my HHGs belong in.  If they don’t come by tomorrow afternoon, I have a feeling Matt and I will be putting that together ourselves.  We like our house unpacked, organized, and cleaned very soon after a PCS and this moving company is crimping our style.

I worked very hard at organizing and sorting the kitchen today, finishing it and the dining room.  I’m sure I’ll tweak it a little, and as I find stuff in random boxes I’ll have to rearrange some things, but for the most part, I have two “finished” rooms.  (Clean bar… except the onion, which I chopped for our dinner just a little while later.)

After I finished this job I asked Matt if I could go for a run.  (He had gotten up at 4:15 am for something Army related and had gotten his work and run done by 7:00.)  He was fine with that, and I laced up my new shoes, but on already tired feet.  Not sure if the discomfort I was feeling was due to the shoes or to having been on my feet for the past three days.  Hoping it’s the exhaustion.  (Check out all my colors:  purple/pink/green/black.  And let me tell you something… it was 75 degrees while I was running and I was wearing a sleeveless shirt and shorts.  It’s JANUARY, people.  That ain’t right!)

I returned to my nice, clean, new kitchen, FULLY stocked with all of MY OWN kitchen goodies and made dinner.  Oh, how I love my own kitchen goodies!  My oversized pans, fantastic Pampered Chef Mix and Chop, and I love having more than six plates/cups/forks.   (ACS loaned us just enough to survive on.)

Dinner around our own table, on our own plates, in our own house.  Felt awesome!  No, it wasn’t our first meal here, but it was the first with our own stuff.

After the mess was cleaned we cleared off the couch and recliner just enough to watch two episodes of Duck Dynasty.  Oh, we are HOOKED!  The boys love it!  Tonight we watched Willie try to teach his daughter how to drive.  So funny!

Then, bed time.  Parker had a hard time falling asleep in his new house before he got his bed.  Now that he has his bed, converted to a toddler bed, and his new “Whiting Queen” bedding and pillow, he doesn’t cry at all.  In fact, that was the first thing he told Matt this morning:  “I not cry in my new Whiting bed.”  Sure enough… tonight he went down, again, with no tears or complaint.  (Mom, I’m SO GLAD you found that set!  It’s perfect and he’s so happy in it!)

After we put the kids to bed, Matt and I played three ‘hands’ of Dominoes.  (Mexican Train… we played the 12s, 11s, and 10s… not sure if those are called ‘hands’ or not.)  We’re exhausted and ready to see an end to this PCS, but it’s hard to get too settled, knowing that in six short months we’re doing this all over again.

"Yes, they're all mine." The answer to the question I hear most often.
View all posts by Jennifer →
This entry was posted in family, military, travel. Bookmark the permalink.