What we will miss: 15 – Our neighborhood.

When we first arrived in Wiesbaden we were given one tip:  Do not live in Crestview.

The day we were given keys to two apartments to inspect we were disappointed to find they were both in Crestview.  We took the Shuttle to the neighborhood, walked all over the place (unable to find the right street) and tried keys in the doors of any house that had a “29” on the front!  We were fortunate that the two other units we tried were empty and therefore we didn’t completely freak some family out with our trying to enter their house!

After a lot of walking, because our house is as far away from the bus stop as possible, we found our new home.  The outside of our house is unimpressive, but when we walked in we were floored at the size of our unit.  I documented our story in “From hotel to home.”

I am a firm believer in “life is mostly what you make of it.”  I understand that the neighborhood was less than appealing to many because there was so much construction going on.  But what that meant to us was that many of the units were empty and that our neighborhood would be fairly quiet, though livening up as the apartments were finished and people moved in.

There are several playgrounds throughout that the boys lose themselves in.  They have made some great friends, learned how to defend each other against bullies, and had their feelings hurt when picked on.  (All the great socialization they miss because they’re homeschooled.)

I sent the boys out on a 15-minute photo-journalism assignment.  I asked them to take a few pictures of the places they play the most using their iPods.  They came back with some fun shots and I made the following collage out of them:

Because we’re in the very back of the neighborhood we are protected from a great deal of traffic.  We love that we’re a short mile away from the PX/Commissary and 10 minutes to Matt’s office (including traffic and going through the gate).  Getting to Mainz-Kastel is a bit of a hassle, so we go there only when we have to.

We love being within walking distance of our favorite doner stand, “Onurs Garten.”

I remember being worried about the parking situation before we arrived.  I had heard of people having to park very far away from their house so this was a point I brought up in prayer.  (Remember, I arrived here pregnant and knew I’d have an infant to carry into the house along with all the groceries, the diaper bag, and anything else that needed to come in.)  The answer to that prayer was that we are able to park right in front of our house, closer than anyone else I’ve seen in Wiesbaden.

We are so fortunate to park right at our door. I took this picture from my office/living room window.

And because of our parking situation, having four drivers in the two units in my building, I’ve gotten to be good at parallel parking.  Who says you can’t drive a big car in Europe?!? 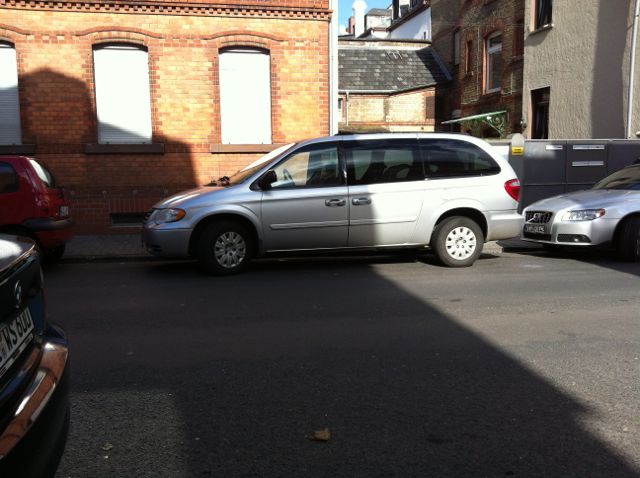 So even though people told us to avoid Crestview, we’ve found it to be a great neighborhood and a great place to live.  We will certainly miss it!

A bit about our trip:

I’ve never been on vacation on the day that the time changes.  There’s a first time for everything!

We will sleep late and have a leisurely day.  All the guide books say to just be in Venice. Get lost in Venice.  See what you want, but just enjoy being there.  So that’s what we’re going to do today.  If we find we need something to do, we will go to the Correr Museum, as it’s already paid for in our Museum Pass.  Otherwise, we’ll get lost and let the boys work on their “seek and find” game I’ve created for them.

I created a list of about 50 things they can look for while we walk around Venice.  (A fire-boat, a police-boat, an ambulance-boat, a dead pigeon, a family with more than four children…)  We plan to see San Barnaba where Indiana Jones found a clue and then we plan to take a good nap.

Tonight we plan to do the Number 1 tourist attraction in Venice:  a real live gondola ride.

"Yes, they're all mine." The answer to the question I hear most often.
View all posts by Jennifer →
This entry was posted in family, germany, travel. Bookmark the permalink.