Before I tell you about my eventful run, I want to show you two pictures that I took.  The pictures themselves aren’t great, but I loved the view I had while on my run, so I snapped them anyway.  I’ll miss these fields… 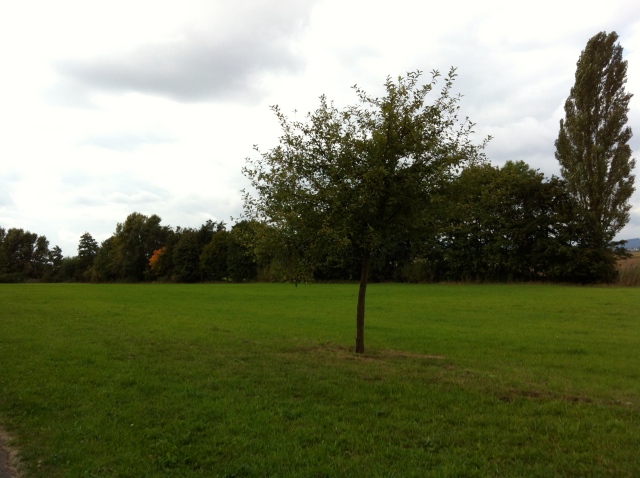 I love that the tree in the background is as ready for fall as I am. It turned orange earlier than all the other trees in the field!  (Look hard.  You’ll see it!  And yes, I’m aware that some of these trees won’t turn colors.  Poor trees.) 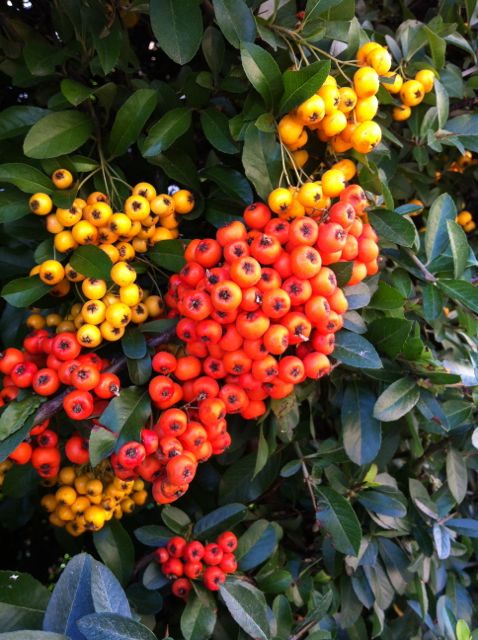 I love that even the berries turn fall-colors!

The following started out as a status update on Facebook that kept going and going and going.  Eventually it got so long I decided it was better suited for a blog post.

“Never trust “MapMyRun” when trying to get an accurate distance. Twice now I’ve used it prior to a run to get a good idea of where I can go to get a few extra miles in my run and it has estimated my distance 1/2 to 1 mile farther than I actually end up running. (I’m starting to outrun my fields.)  So today, when I thought I was going to hit 7 miles, I was only at 6.5. Fortunately I figured that out early and I was able to push through that last half-mile.”

I kept writing the following, which was when I realized I needed to just write this here:

I have a funny story about today’s run: I realized 6 minutes in that I was going to need to potty before my run was over. I was trying to think about the most secluded spot on my entire run where I could hide and take care of my business.

And so I finish the story here:

I was not looking forward to that and contemplated turning around and going home.  The only reason I didn’t is because the “getting out the door” process is the hardest part of running for me.  Once I’ve started, I’m good-to-go.  I didn’t want to have to go through that again.

As I was running to my fields, I passed a storefront I’ve passed dozens of times before, and never noticed it open.  Today, however, I saw something that made me stop dead in my tracks.

A woman was sweeping the floors of a small beauty salon, and her front door was open.  I backed up, stuck my head in and said, “Sprechen Sie Englisch?”  Her fast reply was negative, so I asked, “Haben Sie toilette?” while giving my most pitiful face.  She grinned, got the key, and walked me to the back to a bathroom obviously shared by the other commercial tenants in the building.  What a blessing that bathroom break was!

I was fast, after all, my timer was running, and I think I was in and out of there in 3 minutes, including washing my hands and getting my ear buds and iPod all back in the right places.  I repeatedly said, “Danke Schön,” so that she would know how thankful I was… we’ve all been in a situation like that before, though, this doesn’t normally happen to me during a run!

The rest of my run was fairly uneventful, and for that, I am grateful.  My time, including my potty break, was 1:11:26.  Not bad for my first-ever outdoor seven mile run.

Note to self:  pee just before you leave for a run and always carry tissues with you, just in case.

"Yes, they're all mine." The answer to the question I hear most often.
View all posts by Jennifer →
This entry was posted in running. Bookmark the permalink.