Such a fun weekend!  We played in the park all day on Friday, with perfect weather and no lines.  Almost every ride we rode was line-free so we could jump off and get right back on.  To utilize our time most efficiently we would ride something several times before moving on, just in case the lines were worse on day 2… which happened to be a Saturday.

The last amusement park we went to was Disney World in November of 2009.  I was expecting Parker so I didn’t get to ride many things with the bigs.  This is Parker’s first amusement park and he LOVED the rides that were designed for him.  What I found absolutely precious was that the bigs wanted to ride many rides with Parker!

Here we are enjoying Parker enjoying the rides.  On the Safari Tour Parker would hop off, pick another family member, and those two would run off to get back in line.

There was plenty of time to ride the big-kid rides, too.  Carson’s not much on roller-coasters so I was excited there was one he did like…  in the top-right corner you can see me riding it with all of my bigs!  Matt loved the race car ride.  I rode it once but it was not my favorite… I don’t like the drops that most roller coasters have.  LOVE to spin, go upside down, and as fast as possible, but I hate the dropping feeling! 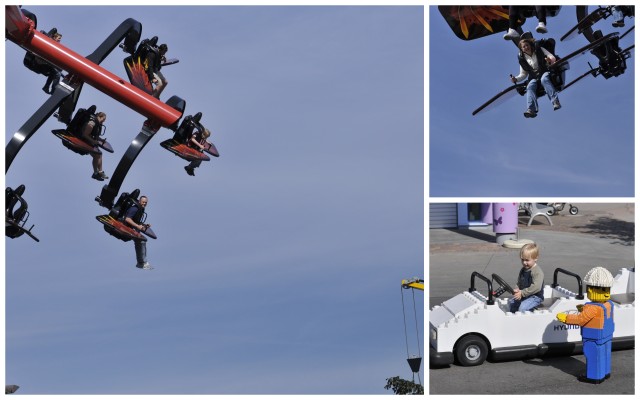 Of course, Legoland isn’t only a theme park.  There are thousands of Lego creations and this one happened to be the boys’ favorite!  It was the Allianz soccer stadium, and it was interactive.  Cameras flashed, signs rolled in and out, fans cheered.  We stood there for a very long time. 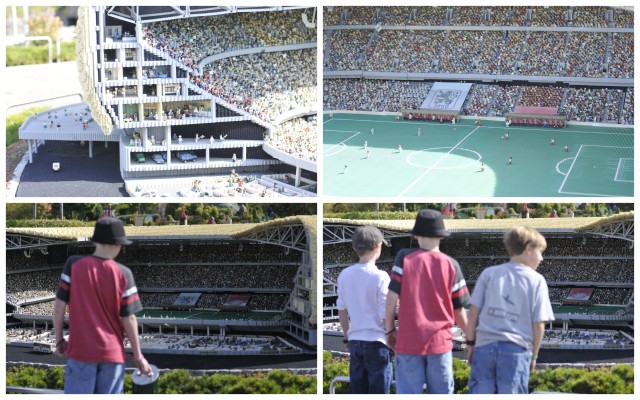 Parker’s favorite Lego creation was the city of Venice.  That’s my boy!  He stood and watched the boats for so long.  I just let him.  I was enjoying the views, envisioning our trip that is coming up next month!

After a full day of play we headed back to the Holiday Village where our Racer Cabin awaited.

There was a full bathroom, six beds, a tv, and we were very comfortable.

After dinner, that we had decided to include in our package, we let the boys play outside on the race track and playground.  Such a fun ending to a fun day! 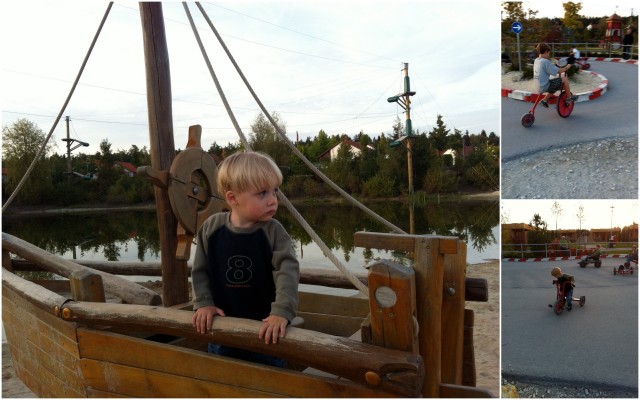 We had a full breakfast included in our package that included much more than fruit.  I had to take these pictures because it was the first meal all four of my children got fruit on their own!  (H, B, & P always choose fruit but Carson is just now starting to venture out and try it.  He’s never liked it before and I’ve always said that one day, out of the blue, he’ll decide he likes it.  Maybe we’re getting close to that day.)  Parker had already downed his fruit before the bigs got to the table with theirs.  He went on to eat a second bowl of it, as well!

Top left:  Boys bathroom sign.  Adorable!
Bottom left:  The first coloring sheet Parker attempted to stay in the lines.
Center:  Parker and the Netherlands.
Top right:  Fall colors!
Bottom right:  Baby Service provided a place for Parker and me to play with Legos while the bigs braved the rain.

We really enjoyed our time there but can’t help but look forward to our next trip… Italia!!

"Yes, they're all mine." The answer to the question I hear most often.
View all posts by Jennifer →
This entry was posted in family, germany, travel. Bookmark the permalink.