This morning we had had to leave Edelweiss, a place we’ve come to know as our ‘home away from home.’ The boys and I traveled 2 hours before stopping for lunch at a rest stop with a Burger King (gag). Matt had to ride on the bus with his soldiers as this was a working trip, so to speak. Imagine our surprise when, halfway through our meal, Matt appeared! Evidently the bus had caught up to us, something that NEVER happens, and they just so happened to stop at the same rest stop at the same time we did! Nice surprise!

After lunch we got back on the road. When we saw a sign for Burg Frankenstein I just had to stop. We’ve heard that it may/may not be related in any way to THE Frankenstein, but that was no matter. We just wanted to see a castle!

I followed the signs (and my GPS) to the castle and we explored. It was mostly ruins and when I got home I read a Wikipedia article that had a funny fact: The two prominent towers you can see for miles around are “historically inaccurate, added in the mid-19th century.” So funny! At least the boys had a good time and we were able to see some beautiful views from those historically inaccurate late additions.

Anyway, the castle dates back to 1292 (and possibly earlier). Pretty amazing to be among such old ruins. It is said that Mary Shelley never came to this castle and may not have even heard of it when writing her book, “Frankenstein,” which was published when she was only 21 in 1818.

The boys running around some of the ruins. 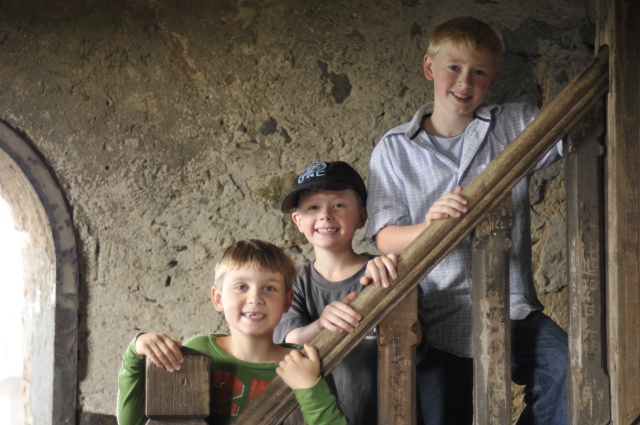 Inside one of the "historically inaccurate" towers.

Quite a view from up here! 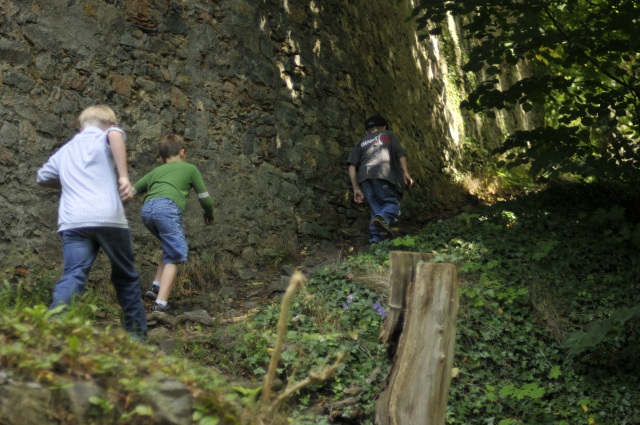 Running through the woods... possibly their favorite part. (Parker was being carried in my back-pack carrier. He was enjoying being out of the car seat for a while!)

"Yes, they're all mine." The answer to the question I hear most often.
View all posts by Jennifer →
This entry was posted in brothers/boys, family, germany, travel. Bookmark the permalink.