Love having friends to do life with. We don’t have to do anything expensive or flashy to have fun. We can all just bring spaghetti sauce and some noodles to the same house, cook it (oh dear LORD it’s summer and cooking has lost it’s appeal) and feed our families: together. And with three one-year-olds in the house, there is no lack of entertainment. While we didn’t just sit there and watch them interact the whole time (we played Hand and Foot… I’m still sorta lost), we did get a kick out of some of their antics.

Sweet baby boy wanted to put this Easter egg half on his head as a hat. Apparently Kayla wanted to as well... 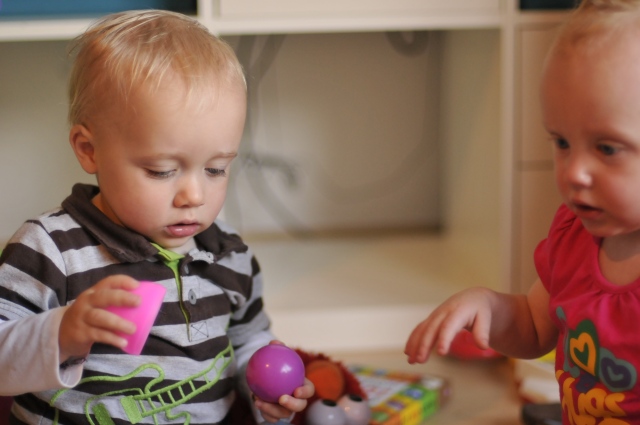 She's trying to communicate to Parker, "May I please have the pink egg half?"

But I don't think Parker could read her mind and it ticked her off. What was more funny than this was the men in the background giving Parker sound advice for his life. "Parker, get used to it!" and "Parker, you're doing the right thing...saying nothing." or "What ever you do, do NOT speak in a moment like this." Oh, those men thought they were so funny! *

And Parker just sat there... no idea what was going on. Blissfully ignorant.

Once the egg situation was under control, Parker moved on to another activity. Connor had, the day before, taken his first steps. It was now his job to teach Parker so the two of them pushed this back and forth across the living room together several times.

I love how Parker always sticks his right foot WAY forward when he takes a step.

So that describes our evening.  Spaghetti and eggs.

*Note:  Kayla had a fun evening, I promise!  I just happen to LOVE crying baby pictures and she was SO funny in this moment that I couldn’t resist posting these!  She really did have a fun night!!!

"Yes, they're all mine." The answer to the question I hear most often.
View all posts by Jennifer →
This entry was posted in brothers/boys, family, parker. Bookmark the permalink.

1 Response to spaghetti and eggs